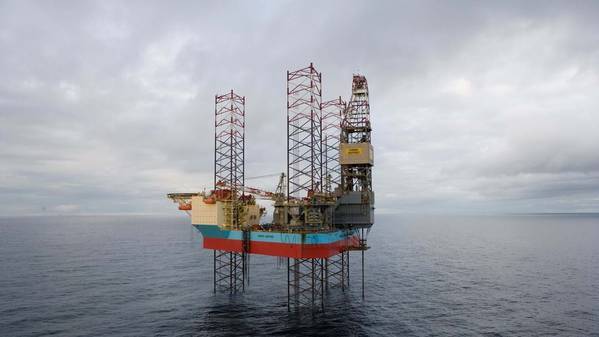 The article originally titled "Yme Start-up Date Uncertain as COVID-19 Delays Maersk Inspirer Works" has been updated to include a statement by the Repsol spokesperson who has confirmed the start-up is now expected in 2021.

Spanish oil firm Repsol was earlier this month given formal approval to use the Maersk Inspirer jack-up rig as a combined drilling and production unit for the development of the Yme field in the North Sea, off Norway.

The field was, after years of delays, supposed to start production in 2020, however, both Repsol and its partners have recently said there may be more delays.

Confirmation that the start-up might indeed spill over into the next year came Wednesday when Maersk Drilling, the company that owns the Maersk Inspirer, released its first-quarter results, in which it said that the COVID-19 pandemic has affected the required modification works on the rig.

Maersk Drilling said: "The restrictions imposed by the COVID-19 pandemic have affected the Egersund yard where the Mærsk Inspirer project is being conducted. The onshore modifications to the Mærsk Inspirer are currently scheduled to be completed in the fourth quarter of 2020, whereafter the rig will move offshore for hook-up and commissioning.“

"It should be noted that pandemic-related restrictions may further affect the project, which means there is increased uncertainty around the project timeline.“

The field was discovered in 1987. Production started in 1996 and ceased in 2001. Canada's Talisman then attempted to redevelop the field using an SBM Offshore supplied mobile offshore production unit.

However, the project was halted after Talisman said it had found structural integrity issues with the platform, and in 2013, a decision was made to scrap the platform.

Spain's Repsol then took over the operatorship of the troubled field, after taking over Talisman in 2015. The platform was removed by the Pioneering Spirit vessel in 2016.

The Norwegian authorities in March 2018 approved Repsol's amended plan for development and operation for the redevelopment of Yme with a goal to bring the field online in 2020.

The plan includes the use of Maersk Drilling's Maersk Inspirer jack-up unit which will be used as a combined drilling and production platform for five years, with a five-year extension option. It will drill on and produce from the Yme field.

Repsol in February said that the start of production would be delayed until the second half of 2020 as preparations took longer than expected. However, Repsol's partner in the project, OKEA, said in April that the start-up might spill over into 2021 due to the COVID-19 pandemic.

Offshore Engineer has reached out to Repsol, seeking info on the expected start-up timeline.

A Repsol spokesperson said: "As previously communicated, we have relatively good progress at the Aker Egersund yard, and have been advised by Maersk Drilling that the onshore completion of Mærsk Inspirer in Egersund is estimated for 4Q 2020. We consider this a realistic progress plan. We now plan for first oil from Yme in 2021."