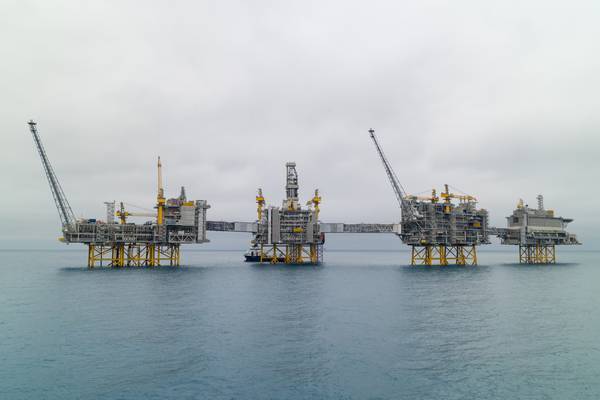 Norway's oil output jumped more than expected in April, the Norwegian Petroleum Directorate (NPD) said on Wednesday, while forecasts for the remaining year's production were cut in line with the government's decision following May's OPEC+ meeting.

The country's crude oil production rose by 4.5% month-on-month from March to 1.78 million barrels per day (bpd), beating official forecasts by 1.8%. It rose 30.1% year-on-year, mainly thanks to the ramp-up of Equinor's giant Johan Sverdrup oilfield.

Daily natural gas output fell by 13% month-on-month, missing the official forecast by 3.7% and was down 10.6% from a year ago. Overall monthly gas output in April totaled 9.0 billion cubic meters.

NPD also updated its monthly production forecast for the rest of the year to reflect Norway's oil production cuts, as well as the delayed start-up of several fields, including Equinor's Martin Linge and Repsol's Yme.

Output in June is now expected to be at 1.61 million bpd, and for the rest of the year at 1.73 million bpd, in line with the government-set output ceiling.

The oil ministry has said it would mean that Norway would cut output by 250,000 bpd in June and by 134,000 bpd during the second half of the year.

The revised NPD forecast for June, however, is just 50,000 bpd lower compared to the view from the beginning of the year.

Analysts have previously said that the government-announced cuts will be lower in reality due to an inflated baseline, a ramp-up of Sverdrup, and summer maintenance.

The government said the announced cuts were made from a reference point of 1.86 million bpd, a level it previously expected to reach by the end of 2020.

The revised forecast showed output in December to be 148,000 bpd lower from the previous view, reflecting delays in starting new developments.