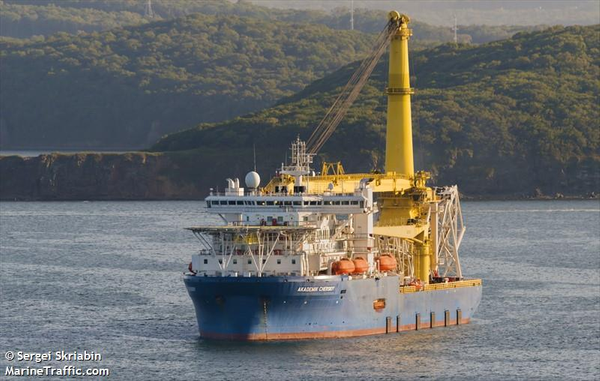 A Russian pipe-laying vessel Academic Cherskiy which Moscow can use to finish laying pipes for the Nord Stream 2 gas project, has moored near the German logistics hub in Mukran, Refinitiv Eikon tracking data showed on Monday.

Cherskiy, bought by Gazprom in 2016, has sailed from the Russian Pacific port of Nakhodka where it was docked in December when the U.S. sanctions put the plan to finish the remaining 160-km stretch near the Danish island of Bornholm on hold, according to the Refinitiv Eikon data.

Nord Stream 2 declined to comment on the timeline but, without naming specifically Cherskiy in a statement to Reuters, said that it was "forced to look for new solutions to lay the remaining 6%".

"Nord Stream 2, as well as the companies supporting our project, is convinced that the soonest possible commissioning of the pipeline is in the interest of Europe’s energy security," the consortium said in an email.

Gazprom did not reply to a request for a comment.

The original pipelayer, the Swiss-Dutch company Allseas, stopped works due to the sanctions and President Vladimir Putin has said that Nord Stream 2, aimed at bypassing Ukraine, could be now launched by end-2020 or early next year.

Germany's energy regulator on Friday, however, declined to grant a waiver of European Union gas directives to the Nord Stream 2 pipeline, dealing a fresh blow to the project to carry gas from Russia to Germany under the Baltic Sea.