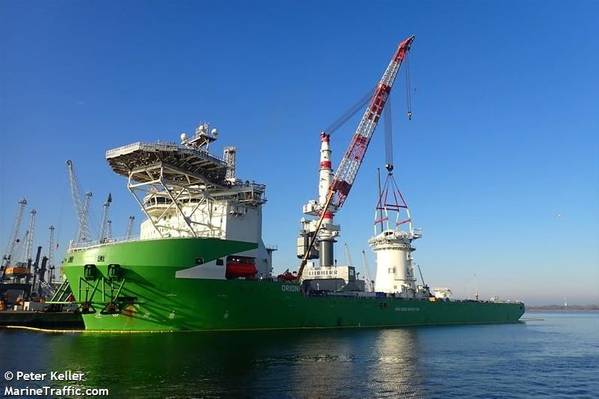 The article was updated to include a statement by a Deme spokesperson who said that the Orion delivery would be delayed following the accident.

Following last week's crane collapse on offshore installation vessel Orion at Liebherr's yard in Rostock in Germany, Liebherr has said that the preliminary findings showed that a broken crane hook was the reason behind the accident.

The crane collapsed and was severely damaged.

In a statement on Tuesday, Liebherr said that while the comprehensive investigations as to the cause and course of the accident were currently underway, preliminary findings point to the crane hook failure as the reason for the accident.

"At this stage in the investigations, the responsible authorities and experts unanimously agree that a broken crane hook was the cause of the accident. The exact reasons as to why the hook did not withstand the load are unclear at this stage of investigations," Liebherr said.

"The design and manufacture of the crane hook was purchased from an external supplier. A design or production error of the Liebherr crane can, therefore, be excluded," Liebherr added.

According to Liebherr, the overload test for the HLC 295000 was planned for a load scenario of 5,500 tonnes. The lift should have been carried out through the hoisting of a barge.

Carrying out an overload test is a typical procedure for the industry, where the crane is tested for its maximum lifting capacity.

"Currently known facts indicate that the incident occurred at a load of around 2,600 tonnes causing a chain reaction which led to the accident.
As things stand, the accident has no effect on day-to-day operations at Liebherr-MCCtec Rostock GmbH. According to initial estimates, the damage amounts to a high double-digit million figure," Liebherr said.

Both Liebherr and Deme have previously boasted that the giant crane, measuring more than 145 meters, could lift nine fully loaded Airbus A380 aircraft in one go.

Several people were injured in the incident, with two injured persons having to be taken to hospital for treatment. A further ten persons were
treated by paramedics on site.

“At this point, we wish the injured persons all the best and hope for a full and speedy recovery,” said Leopold Berthold, Managing Director of Liebherr-MCCtec Rostock GmbH. "Considering the extent of the damages, we are above all thankful that it did not cause more personal injuries.

Our priorities currently lie in fully supporting the investigating authorities in order to contribute to the quickest possible clarification of the accident,” added Berthold.

Deme said on Saturday that the Orion was still seen as "under construction" and owned by the Chinese company COSCO (QIDONG) OFFSHORE CO., LTD.

The vessel was expected to be delivered to DEME in the second half of May 2020. The Orion is designed for the construction of the largest offshore wind farms, to service the oil and gas industry and for the decommissioning of offshore installations.

The vessel was to go straight to the Moray East offshore wind farm project in the UK for the installation of 103 jackets.

Offshore Engineer has reached out to Deme, seeking info on the expected delivery date of the vessel, in the wake of the accident, and on the impact of the Moray East work schedule.

A Deme spokesperson responded that the delivery would not take place in May, as previously expected.

The spokesperson said: "As the expected delivery in May will not take place, we are looking for a replacement vessel to deploy at Moray East, both in our own fleet as externally. As investigations on the accident are ongoing, it is too early to tell what the Orion timeline will be."

Below is a video shared on YouTube showing the moment the crane collapsed: