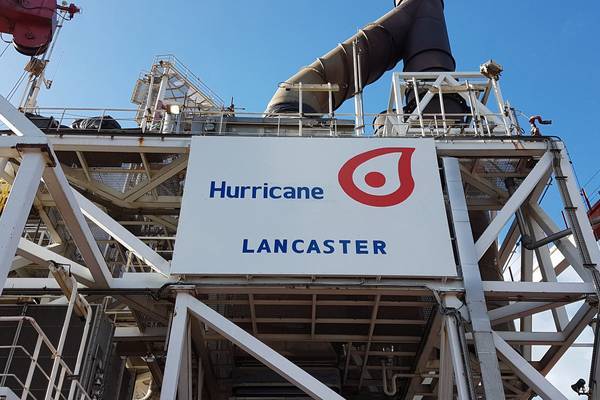 The UK-focused oil firm Hurricane Energy has said it is very pleased with the performance of its Lancaster Early Production System offshore the UK.

In an update on Wednesday, the company said there had been three cargo liftings from the Aoka Mizu FPSO during the quarter. On 3 April 2020, the eleventh successful crude lifting took place taking total oil sales from the Lancaster EPS to 4.4 million barrels of oil.

The company also informed that it had completed prolonged individual flow test on the 205/21a-6 well at the end of January, then reverted to producing from both wells at progressively increasing rates in February.

This recent oil production rate has been associated with approximately 6,000 barrels of water per day, predominantly from the 205/21a-7Z well. The overall water cut for the quarter was approximately 17%. This level of water production is well within the capacity of the Aoka Mizu FPSO's installed water handling facilities.

"These production rates have been achieved without the use of electrical submersible pumps (ESPs) and with the wells choked back to less than 50%, confirming the extraordinary productivity of these wells and the reservoir," Hurricane Energy said.

Robert Trice, Chief Executive of Hurricane, commented: "We are very pleased with the performance of the Lancaster EPS in Q1 2020. As at the end of March, the EPS has safely produced approximately 4.4 million barrels of oil since starting up last year. Despite the significant scale of these produced oil volumes, the Lancaster EPS is still very much in a data-gathering phase, as we continue to better our understanding of this unique basement reservoir. Further testing at the current rates will be required before any trends can be confirmed and conclusions made about the long-term behavior of the reservoir.

"Once trends have been established, it is anticipated that alternative combinations of well rates may be tested in order to establish the optimum long-term production configuration for the two wells."

"Whilst water production rates have materially increased since start-up of the Lancaster EPS, Hurricane's interpretation of water behavior data has continued to support the Company's perched water model. Although it is not possible to predict future changes in water cut at present, the combination of high productivity wells, potential for currently unused production support from ESPs, and water handling capacity of the Aoka Mizu FPSO give the company sufficient confidence to maintain its forward guidance at 18,000 bopd, net of 10% assumed downtime."