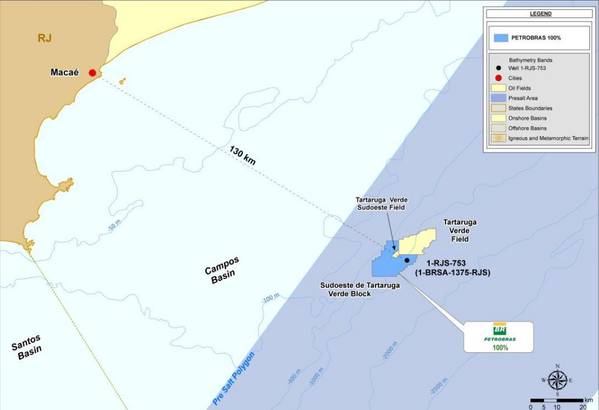 -Brazilian oil company Petrobras has found presence of oil at the Natator exploration well in the Campos Basin, offshore Brazil.

Petrobras said Thursday that the well, in the Sudoeste de Tartaruga Verde block, was located 130 km from the city of Macaé (RJ), in water depths of 1,080 meters, with the discovery of oil in carbonate reservoirs in the post-salt section.

"The well data will be analyzed to better target exploratory activities in the area and assess the potential of the discovery," the company said. The company did not say which drilling rig was used for the operation.

The Sudoeste de Tartaruga Verde block is operated by Petrobras, which owns a 100% stake.

This is Petrobras' second oil discovery announced in the past week. The company last Thursday said it had struck oil in the pioneer well of the Uirapuru block, located in the Santos Basin pre-salt. at a water depth of 1,995 meters.