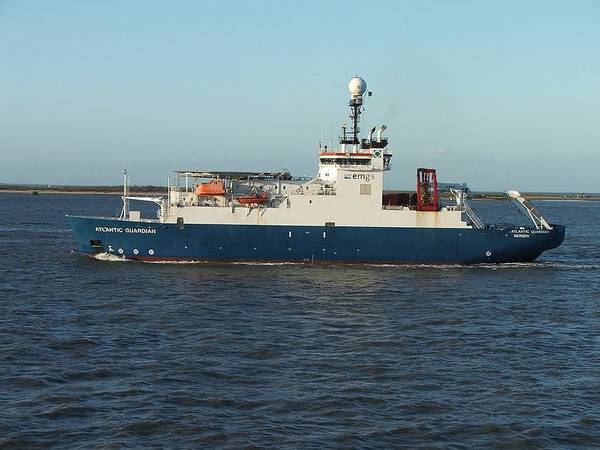 Norwegian offshore survey company Electromagnetic Geoservices has signed a letter of intent with a minimum value of $3.6 million from an undisclosed client for a survey offshore Namibia.

Under the terms of the pending data licensing agreement, a final survey option type and license fee are expected to be determined by the customer within the end of Q1 2020, EMGS said Friday.

Subject to the final award, the customer will pre-fund a new multi-client CSEM data acquisition in the Walvis Basin using EMGS's next-generation DeepBlue, a deep-towed source developed under a joint industry project involving Shell and Equinor.

The survey acquisition is expected to start between May 1, and August 1, 2020, using the vessel Atlantic Guardian. The vessel has recently left Mexico where it previously worked for Pemex.

Bjørn Petter Lindhom: "We're delighted to receive this letter of intent for a multi-client campaign in the Walvis Basin. Securing this additional commitment in Namibia also enables EMGS to convert an existing acquisition contract in Block 2113A, announced by EMGS in August 2019 with Nabirm Global LLC, from a vessel of opportunity with backstop, to a firm survey commitment in 2020.

"We continue to engage with customers with a view to further expand the planned data coverage to provide a first-class CSEM dataset extending between the Walvis & Orange Basins, where several high-impact deep-water exploration wells are planned in 2020."

Related: EMGS Looking at Options After Pemex Says No More Work to Be Awarded

The firm contract would give some relief to EMGS which last week received news from Pemex that the oil company would not need its services in the near term. EMGS said Pemex's decision would have a "material detrimental effect" on its business.

As previously reported, EMGS had in June 2019  signed a two-year 3D CSEM contract with Pemex, saying that the value would be a maximum of $73.3 million and with a minimum value of around $29.3 million.

The company then in the third quarter moved the Atlantic Guardian vessel to Mexico, to start working on a survey under the contract.

Come January 22, 2020, EMGS said it was in the process of finishing all acquisition work initially ordered by PEMEX, with additional acquisition operations subject to the issuance of new call-offs by Pemex.

Its CEO at the time said the company had reason to believe that "additional acquisition work is likely to be forthcoming," however, EMGS last Thursday said no new orders were expected, based on the info obtained from the client.

EMGS' backlog at the end of the fourth quarter of 2019 was $58.0 million, of which $14.3 million was firm, and the majority of the remaining $43.7 million was the non-committed part of the Pemex acquisition contract.

In a recent report, EMGS said the Atlantic Guardian would leave Mexico, then transit to Las Palmas for upgrades to the Deep Blue system followed by the start-up for BP in Mauritania & Senegal, and that the Petrel Explorer vessel would move to Mexico.

According to MarineTraffic, the Atlantic Guardian is "underway using engine", expected to reach Las Palmas on March 7, 2020.