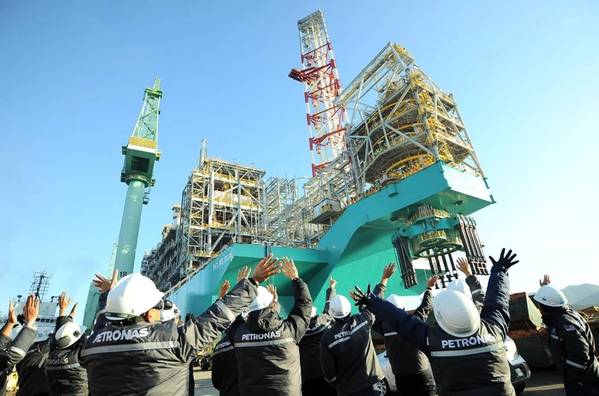 Malaysian oil and gas giant Petronas has said that its second FLNG Unit, the PFLNG Dua, has set sail from South Korea, and is on its way to the Rotan gas field, offshore Malaysia.

The journey, which started from the Samsung Heavy Industries yard in Korea, will cover 1,840 nautical miles over a course of approximately two-weeks.

Once moored at the Rotan gas field at a water depth of 1,300 meters, the 393-meters long FLNG DUA will start its installation, hook-up, and commissioning.

The PFLNG Dua is expected to be start-up read by mid-2020 and with provisional acceptance (PA) of the PFLNG Dua expected by the end of the year.

When ready, the PFLNG Dua will be operated by a 120-strong crew and is expected to produce one LNG cargo every two weeks. PFLNG Dua has the capacity to produce 1.5 million tonnes of LNG per annum.

Worth noting, once the PFLNG Dua starts producing, Petronas will become the only company in the world simultaneously operating two FLNG units.

Also, a Petronas executive in December 2019 said the company would be open to building a third FLNG unit if there was a demand for it.

Elsewhere in the FLNG space, Eni has recently launched its Mozambique-bound Coral FLNG hull in South Korea, Shell's Prelude FLNG in Australia was shut down earlier this month after an electrical trip, and Singapore's Keppel is converting an LNG tanker into FLNG for BP's Tortue Ahmeyim project in Senegal/Mauritania offshore area. This FLNG unit is set for delivery in 2022.