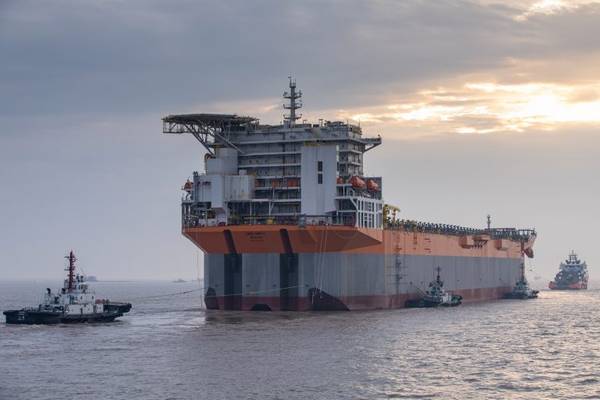 SBM Offshore ordered the MPF1 hull on speculation in July 2017, and the hull was completed in less than two years from first steel cut in March 2018.

The MPF1 hull became allocated to the Liza Unity following ExxonMobil’s May 2019 final investment decision (FID) for Liza Phase 2, which gave SBM Offshore responsibility to construct, install and thereafter lease and operate the floater for up to two years.

ExxonMobil has said it anticipates that by 2025 at least five FPSOs will be producing more than 750,000 barrels per day from the Stabroek block, where current estimated discovered recoverable resources top more than 6 billion oil equivalent barrels.

According to SBM, Liza Unity is designed to produce 220,000 bopd, with associated gas treatment capacity of 400 million cubic feet per day, water injection capacity of 250,000 barrels per day and around 2 million barrels of crude oil storage. The FPSO will be spread moored in about 1,600 meters water depth.

The Liza Unity FPSO design is based on the Fast4Ward program with a newbuild, multipurpose hull combined with several standardized topsides modules. Basic design approval has been given by both Bureau Veritas and ABS.

Following on the heels of MPF1, SBM Offshore currently has four additional MPFs in the construction phase in two yards in China (MPF2, MPF3, MPFA and MPFB), following an order for two additional hulls announced in December 2019.

SBM said it expects the subsequent units will gain on schedule, as the engineering phase will be reduced.