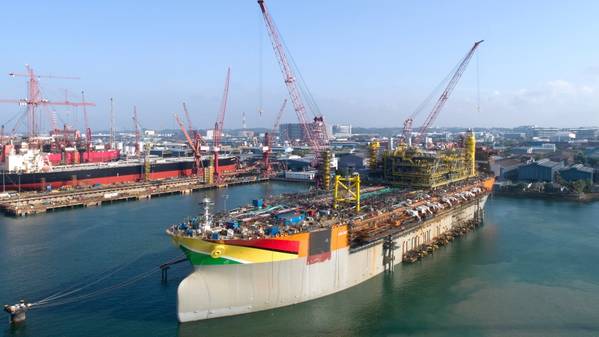 ExxonMobil has funded the Liza Phase 2 development offshore Guyana after it received government and regulatory approvals, the supermajor announced on Friday.

A total of six drill centers are planned as well as approximately 30 wells, including 15 production, nine water injection and six gas injection wells. Phase 2 will develop approximately 600 million barrels of oil. Liza Phase 2 is expected to cost $6 billion, including a lease capitalization cost of approximately $1.6 billion, for the Liza Unity floating production, storage and offloading (FPSO) vessel, which will be spread moored in water depth of about 1,600 meters and will be able to store around 2 million barrels of crude oil.

SBM Offshore was awarded the front end engineering and design (FEED) contract for the FPSO in July 2018. The FPSO design is based on SBM Offshore’s Fast4Ward, which incorporates a newbuild, multipurpose hull combined with several standardized topsides modules.

“With the government of Guyana and our partners, ExxonMobil is bringing industry-leading upstream capabilities to build upon Phase 1 and further develop the shared value of Guyana’s resources,” said Liam Mallon, president of ExxonMobil Upstream Oil & Gas Company. “We are actively pursuing significant development potential from numerous discoveries in the Stabroek Block.”

Exxon estimates current discovered recoverable resources in the 26,800-square-kilometer Stabroek Block at more than 5.5 billion barrels of oil equivalent. The 13 discoveries on the block to date have established the potential for at least five FPSO vessels producing more than 750,000 barrels of oil per day by 2025.

Exxon said Liza Phase 1 is on track to achieve first oil by the first quarter of 2020. It will produce up to 120,000 barrels of oil per day at peak rates utilizing the Liza Destiny FPSO, also from SBM, which is expected to arrive offshore Guyana in the third quarter of 2019.

Pending government and regulatory approvals, a final investment decision (FID) is expected later this year for a third phase of development, Payara, which is expected to produce between 180,000 and 220,000 barrels per day with startup as early as 2023. ExxonMobil said it is evaluating additional development potential in other areas of the Stabroek Block, including at the Turbot area and Hammerhead.

Later in 2019, the Stena Carron will drill a second well at the Ranger discovery. The Noble Bob Douglas drillship is completing development drilling operations for Liza Phase 1. ExxonMobil will add another exploration drillship, the Noble Don Taylor, in the fourth quarter of 2019.

“We are excited to achieve another significant milestone in the development of the Stabroek Block,” CEO John Hess said on Friday. “We look forward to continuing to work with the Government of Guyana and our partners to realize the extraordinary potential of this world class resource.”