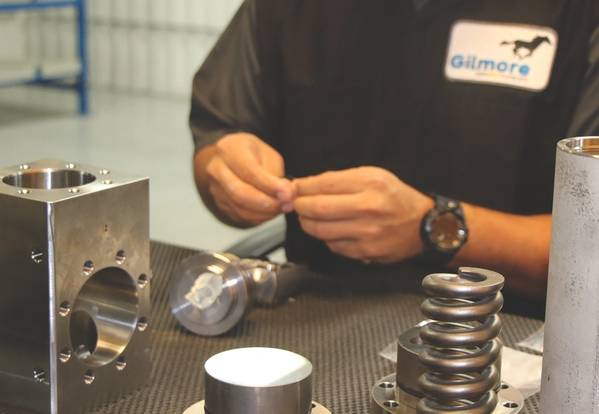 A technician works on a new regulator in Gilmore’s Houston facility. (Photo: Gilmore)

When it comes to smooth, safe drilling, you’d be hard-pressed to argue that the blowout preventer (BOP) stack isn’t the key to the whole operation. A series of mechanisms to regulate pressure levels in a well and prevent blowouts, which could potentially endanger personnel and the environment, let alone halt production, is unquestionably vital equipment.

This sizeable unit weighs more than 300 metric tons and subsea stacks can be over 60 feet in height, consisting of multiple ram and annular preventers, and a myriad of critical pipework. The BOP is essentially one vast valve whose basic role is to shut in a well when required, sometimes within minutes, if a control problem, such as a kick, occurs during the drilling process and threatens a blowout.

But within the BOP stack are many further integral smaller parts, from valves to actuators, which must function reliably. The BOP stack is basically tens of millions of dollars’ worth of kit designed to enable drilling activities but in effect – the system is only as reliable as its least reliable component. In the challenging subsea environment, BOP stacks are inevitably more complex and involve even more components than surface stacks.

At Gilmore, we develop a range of hydraulic flow control valves and regulators to perform a variety of critical tasks topside, subsea and downhole. For instance, on BOP stacks, our products play multiple roles, including helping to alleviate pressure kicks encountered while drilling and initiating the closure of the BOP when issues arise.

We recognize that if a key subcomponent fails then the whole BOP stack will most likely need to be pulled, such is the crucial nature of this piece of the drilling infrastructure. A stack pull represents a major intervention to the entire operation, which could be forced to shut down for up to a fortnight, depending on water depth.

Costly stack pulls
The financial penalties of such an outcome are severe for operators. Even during a scheduled outage for preventative maintenance, costs can easily run into several million dollars, but with an unplanned shutdown, requiring investigation, diagnosis and repair, producers are immediately hit by the substantial daily rental costs of drilling rigs, offshore support vessels and other service providers. That is without factoring in lost production from the well over that period.

For drilling contractors and original equipment manufacturers (OEM), operating in increasingly competitive markets where margins are slim, downtime is a significant problem. Contracts are handed out largely based on good uptime ratios and if a critical valve was to fail on a BOP stack, necessitating a pause in drilling rig operations, then this could mean the difference between winning or losing the next potential contract.

Such insights can only come from being close to the market and listening to customers. At Gilmore, we understand the driving issues and requirements of our end users, and so, consequently, our own design and manufacturing strategy is governed by prioritizing the serviceability, durability and reliability of our products.

Drillers fundamentally demand valves that will develop few failure issues and will be easy and quick to maintain when they carry out their regular servicing schedules. Ideally, they want to be able to “set it and forget it” and then focus on other aspects of their day-to-day operations.

Feedback from the market and end users can be crucial to guiding future product development and strategy for flow control component manufacturers. In 2017, Gilmore became one of only two manufacturers to tie up with the Rapid S53 Reliability and Performance Information Database for the Well Control Equipment covered under API S53 and established by the IOGP and IADC.

This has provided hugely valuable commentary directly from operators and drillers out in the field about the type of issues they encounter. We have gained visibility about how our products are performing and also how the industry has been utilizing our valves. Previously, once an OEM acquired a valve, typically a manufacturer would have little awareness as to how that part would subsequently be used.

The information we have garnered from the S53 program, along with additional feedback from our customers, has shaped how we have designed and engineered our latest generation of hydraulic flow control valves.

We scrutinized how the materials used across our portfolio could be further enhanced so that our valves could become even more corrosion resistant when exposed to seawater and more durable.

Likewise, by accentuating serviceability and developing modular and standardized designs, it means we gain efficiencies on our inventory, reduce our lead times to customers and improve their own cost savings as maintenance cycles are so much quicker and less prone to human error.

Listening and testing
Seeking out the opinions of end users should be a priority for any valve manufacturer, and these can then guide product-testing methodologies. Our goal is to ultimately test as close to real life conditions as possible. We force flow rates of up to 300 gallons per minute through our products and use highly abrasive fluids, up to Nox (nitrogen oxide) class 10-12, so if any issues arise, then they occur in the testing facility and not out on the rig.

By understanding the needs and challenges of the customer, and adapting product designs accordingly, then engineering valves with greater durability and reliability becomes far more likely.

What will differentiate the successful sub-component manufacturer from the rest will be the ability to provide solutions that offer peace of mind to drillers and OEMs, with a greatly reduced risk of failure and costly downtime.

The authors
David Nemetz is President, Gilmore, a Proserv Company.