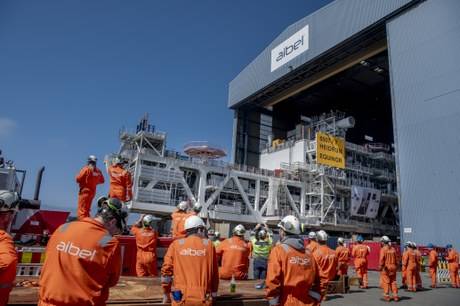 After two and a half years of work, the M40 module for the Wintershall DEA operated Dvalin project offshore Norway is now ready for delivery and sail away, makred by a July 18 ceremony outside the North Sea Hall at Aibel’s yard in Haugesund.

The Dvalin contract was awarded to Aibel  in October 2016, and the company has been responsible for the engineering, procurement, construction and installation (EPCI) of two new modules and major modifications offshore. Engineering has been carried out from the Oslo office, while construction has taken place in Haugesund with the support of the yard in Thailand and local subcontractors.

H25, the first module for the Heidrun platform, was delivered in the spring of 2018, and the handover of the 3,500 metric ton M40 module marks the end of the project’s construction phase. The installation phase is expected to be completed during September 2020.

Aibel has also been responsible for clearing space on Heidrun and will carry out integration of the modules on the platform.

“The M40 module is a significant investment for DEA, but the project could not have been in better hands. Aibel's team in Haugesund has delivered a high quality complex module, on schedule and with an outstanding safety record and safety culture. DEA would like to congratulate and thank Aibel on this fantastic achievement,” says Roy Padgett, Wintershall DEA’s Facilities Project Manager for the Dvalin development.

Aibel’s customer is Equinor, while operator on the Dvalin field, DEA, is the end customer.

“I hope the collaboration in this project can become an example of how the supplier and customer can work together to ensure that the industry remains competitive and well equipped for the future,” President and CEO of Aibel, Mads Andersen, states.

The Dvalin gas field, located in the Norwegian Sea about 15 kilometers northwest of the Equinor-operated Heidrun platform and 290 kilometers from the Nyhamna process plant, is estimated to hold 18.2 billion cubic meters of gas.

Production is planned to start in 2020. To enable that, four production wells are to be connected to the existing Heidrun platform, via a subsea template installed on the seabed.