Half of the 6.7 billion barrels of oil equivalent (boe) new conventional oil and gas discoveries in the first half of 2019 were deepwater finds, signalling a return for explorers to high-risk frontier deepwater plays, said analyst Rystad Energy.

Year-to-date average monthly discovered volumes above 1.1 billion boe reflect an uptick of approximate 35% compared to the 827 million boe seen in 2018, according to Rystad's mid-year review. It said so far 2019 has been a year of gas discoveries, which hold a majority (63%) share compared to liquids, a phenomenon not seen since 2016.

Rystad said majors and integrated national oil companies with a high-risk appetite have seen successes in frontier regions, accounting for more than an 80% share of 2019 discovered volumes to dominate conventional exploration performance. 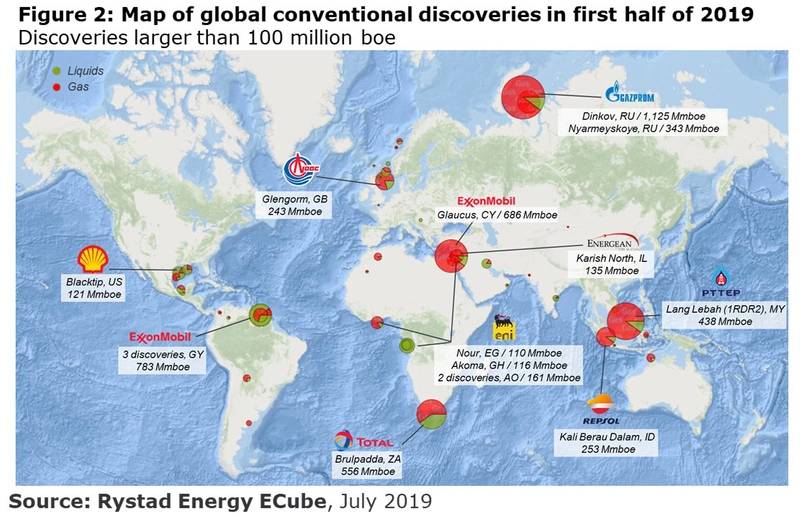 Of the 56 global conventional discoveries identified by Rystad Energy so far this year, 30 are located offshore.In the first half of 2019, Russia led in terms of total discovered resources, followed by Guyana, Cyprus, South Africa and Malaysia.

Two big gas discoveries announced by Gazprom in the Kara Sea off the northwestern part of West Siberia's Yamal Peninsula – Dinkov and Nyarmeyskoye – together hold nearly 1.5 billion boe of recoverable gas resources. Dinkov, the larger of the two fields, holds 1.1 billion boe of resources, making it the largest discovery so far this year.

In Guyana, ExxonMobil’s spate of oil discoveries continue in the Stabroek block, with three major discoveries reported in 2019 – Tilapia, Yellowtail (oil) and Haimara (gas-condensate). These three fields could collectively hold almost 800 million boe of recoverable reserves. ExxonMobil’s success rate in the 15 wells drilled so far on the Stabroek block stands at an impressive 86%. First oil from the block is expected in mid-2020.

ExxonMobil also made headlines in the Mediterranean Sea, notching up its maiden success with the giant Glaucus gas discovery off Cyprus. The discovery is estimated to hold 700 million boe in recoverable resources and is the second major find in Cypriot waters after Eni’s Calypso gas discovery, which has a similar resource size. ExxonMobil is lining up an appraisal campaign on this discovery in 2020. Eni and partner Total are also planning to begin a five-well drilling program off Cyprus later this year.

Total’s Brulpadda wildcat completed in February in Block 11B/12B made a large gas-condensate discovery in the Lower Cretaceous Post-rift Paddavissie Fairway in South African deep water. Total and partners in the block have reported that the discovery could hold a billion barrels or more. Results from PVT analysis and technical validation are still being assessed in an effort to confirm the resource size. Rystad Energy currently estimates the discovery resource size at between 500 million and 600 million boe. Four additional prospects – Luiperd, Platanna, Woudboom and Blassop – have been de-risked within the fairway and a multi-well drilling campaign targeting oil in the eastern side of the fairway is expected to commence on the block in early 2020. The campaign might be carried out in stages as the operational window in the area is limited to December to March. The Luiperd prospect, with a pre-drill resource estimate of more than 500 million boe, might be spud next.

Thailand’s national energy company PTTEP unveiled a major offshore gas discovery with the Lang Lebah-1RDR2 exploration well in SK410B license in Malaysian waters. Rystad Energy estimates the discovery could hold between 2 trillion and 2.5 trillion cubic feet (Tcf) of gas. The discovery is believed to be the largest discovery ever made by PTTEP as operator and is in alignment with the company’s strategy to expand its footprint in the region. 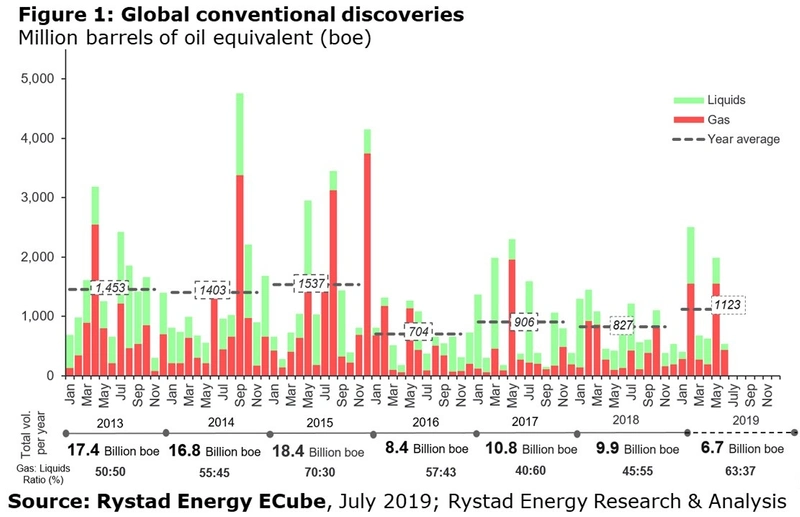 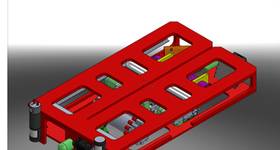