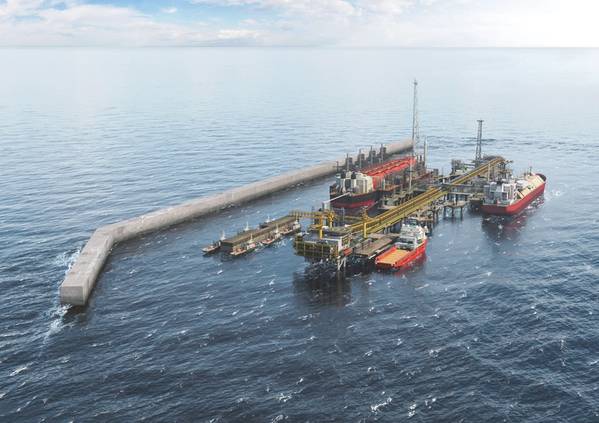 BP’s Tortue project was given the green light late last year and will come online in 2022. (Image: BP)

The Greater Tortue Ahmeyim-1 well (GTA-1) was drilled by the Ensco DS-12 rig in approximately 2,500 meters water depth and to a total depth of 4,884 meters, on the eastern anticline within the unit development area.

The well, which is located approximately 10 kilometers inboard of the Guembeul-1A and Tortue-1 wells, has been designed as a future producer and will be used to further optimize the development drilling plans for the cross-border Greater Tortue Ahmeyim LNG project, the first phase of which was green-lighted by BP and partners SMPHM, Petrosen and Kosmos in late 2018 and is on track to deliver first gas in the first half of 2022.

“The GTA-1 well confirms our expectation that the gas resource at Greater Tortue Ahmeyim will continue to grow over time and could lead to further expansion of this world-scale 10 MTPA LNG project,” said Kosmos chairman and CEO, Andrew G. Inglis.

“In addition, Kosmos’ process to sell down its interest to 10% has received considerable interest from the industry, with initial bids expected over the summer, and transaction conclusion anticipated by year end,” Inglis added.