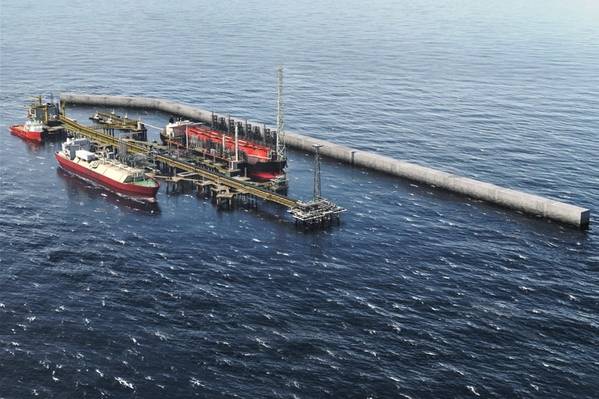 BP and its partners announced on Friday that the green light has been given for the first phase of the Greater Tortue Ahmeyim project off the coast of Mauritania and Senegal.

The cross-border development, a first for the two West African nations and Africa's deepest offshore project at 2,000 meters below the sea's surface, will produce gas from an ultra-deepwater subsea system and mid-water floating production, storage and offloading (FPSO) vessel, which will process the gas, removing heavier hydrocarbon components.

Gas will be transferred to a floating liquefied natural gas (FLNG) facility at a nearshore hub located on the Mauritania and Senegal maritime border. The FLNG facility is designed to provide circa 2.5 million metric tons of LNG per annum on average. Total gas resources in the field are estimated to be around 15 trillion cubic feet.

The development, the first major gas project to reach final investment decision (FID) in the basin, is planned to provide LNG for global export as well as making gas available for domestic use in both Mauritania and Senegal. BP's trading arm BP Gas Marketing will be the sole buyer of the project's LNG.

The gas field is located on the maritime border between Mauritania and Senegal, and the go-ahead for its development was given after the two nations' governments came to an agreement for sharing production.

BP said the parties will continue to finalize agreements and obtain final regulatory and contract approvals, following which Phase 1 of the development will move into a detailed design and construction phase, with award of engineering, procurement, construction and installation (EPCI) contracts. Work on the project will begin in the first quarter of 2019, and first gas is expected to in 2022.

Kosmos Energy discovered the Greater Tortue Ahmeyim field in 2015, and BP signed onto the project through an agreement with Kosmos in 2016.

A number of contracts have already been awarded in 2018 for front-end engineering and design (FEED) for the phase one development of the Greater Tortue Ahmeyim project, including for the gas processing FPSO vessel (TechnipFMC), LNG hub/terminal marine civils (Eiffage Saipem Consortium), LNG hub/terminal facilities (Saipem), and subsea (McDermott and BHGE).

Earlier this week BP gave Golar LNG a limited notice to proceed (LNTP) for the provision of the development's FLNG.