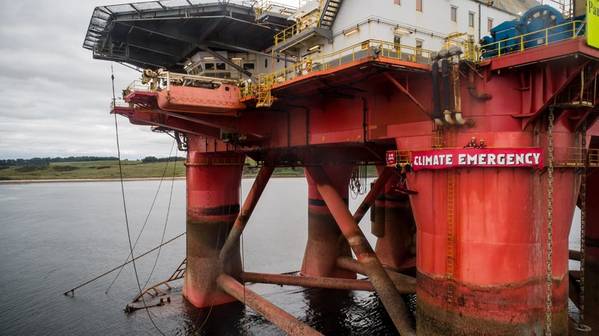 Greenpeace activists climbed back on a drilling rig on Friday to keep it from heading to a BP oilfield in the British North Sea, hours after police removed protesters who had boarded the vessel days earlier.

On Thursday night police removed and arrested two Greenpeace activists who had spent over 70 hours blocking the rig from leaving Cromarty Firth, north of Inverness, Scotland, Greenpeace said in a statement.

"We can’t give up and let oil giants carry on with business as usual because that means giving up on a habitable planet and our kids’ future," said Greenpeace UK’s executive director, John Sauven.

Two more Greenpeace activists climbed up a leg of the rig in the early hours of Friday, the group said, adding it is organizing shifts for its climbers in its effort to prevent BP from drilling its Vorlich field.

Police have arrested nine people in connection with the protest, Scottish police said, adding they were working with the operators of the rig to reach a "safe resolution to the continuing protest".

BP said in a statement it was coordinating with rig-owner Transocean and Scottish police.

"BP supports debate, discussion and peaceful demonstration, but the irresponsible actions of this group are putting themselves and others unnecessarily at risk, while ignoring court orders and police action," the company said.

The Vorlich field, a relatively small development thought to contain 30 million barrels of oil, is due to come onstream in 2020. BP is working on the project together with Ithaca Energy, a unit of Israel's Delek Group poised for a stock market listing.