Total Plans to Produce at Absheron in 2021 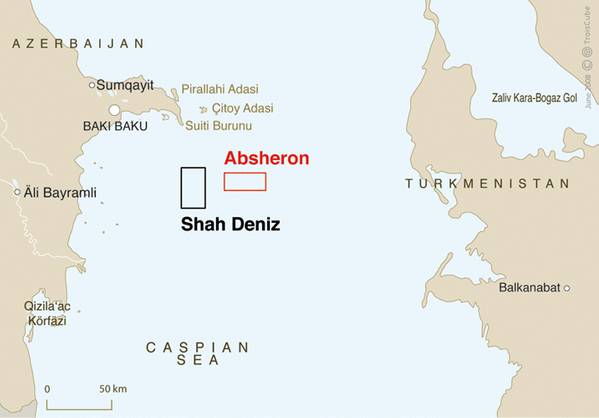 French oil firm Total plans to start production at Azerbaijan's Absheron gas field in the Caspian Sea in 2021 after getting positive results from the drilling of a first well, a senior company official told Reuters.

The decision to start production at the field, which is being jointly developed by Total and Azeri state energy company SOCAR, boosts the ex-Soviet republic's potential as a major gas exporter.

The field has estimated reserves of 350 billion cubic meters (bcm) of gas and 45 tonnes of gas condensate, according to SOCAR.

"It was quite positive and confirmed the estimates that we made when we (first) discovered (gas) in 2012," he added.

Production at Absheron will be phased. A first development phase is underway, while studies for second phase are just starting. Lemarchal said each phase would cost several hundred million dollars.

The first phase will produce about 1.5 bcm of gas per year and will supply the domestic market. The condensate will be exported through Baku-Tbilisi-Ceyhan oil pipeline.

The next phase is expected to produce about 5 bcm of gas per year.

Lemarchal said it had not been decided who would buy gas produced at Absheron in the future.