The state of Connecticut has reached a harbor development agreement and announced the start of a $93 million investment at State Pier, the beginning of what state officials foresee as the transformation of an underutilized port into a hub for the offshore wind industry.

The Connecticut Port Authority, the state’s quasi-public agency responsible for marketing and coordinating the development of the state’s ports and maritime industry, and terminal operator Gateway, are partnering with Bay State Wind, a joint venture between Ørsted and Eversource, on a new deal that will redevelop State Pier into a world-class, state-of-the-art port facility through combined public-private investment of $93 million to upgrade its infrastructure and heavy-lift capability.

These upgrades will allow State Pier to meet the facility requirements of the offshore wind industry and will benefit the port’s long-term growth by increasing its capability to accommodate heavy-lift cargo for years to come.

“Connecticut’s maritime economy has significant potential to drive economic growth and create jobs across the state, and redeveloping State Pier is a central component to that growth,” Governor Lamont said.

“This new public-private partnership reaffirms the unwavering commitment of the state to increase procurement of offshore wind and make the economic expansion of our maritime economy a reality. We look forward to working with our new partners to position Connecticut as a leader in the offshore wind industry and expand economic opportunity throughout the region,” he added.

The State Pier harbor development plan calls for a two-phased effort at State Pier. First, a three-year development project will upgrade the facility infrastructure to meet the heavy-lift requirements of Ørsted and Eversource’s offshore wind components. Second, following the successful completion of the project, Ørsted and Eversource will enter into a ten-year lease agreement granting their joint venture the use of State Pier for wind turbine generator assembly and staging.

“With this public-private partnership comes the significant opportunity for job creation, local investment, and economic benefits for southeastern Connecticut and the wider region,” Thomas Brostrøm, Ørsted President of North America and Ørsted U.S. Offshore Wind CEO, said. “We look forward to continue working with the state, the City of New London and our partners the Connecticut Port Authority and Gateway Terminal, as we drive towards a green economy, bring more sources of clean energy to Connecticut, and ultimately lower carbon emissions for our planet.” 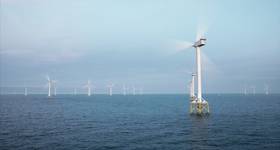