Cautious Optimism for an Offshore Recovery 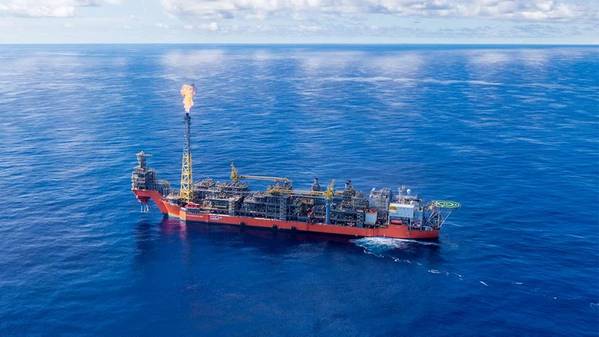 Much has been made of an expected recovery for offshore. We share that optimism. We think there will be around 20 final investment decisions (FID) for floating production, storage and offloading units (FPSO), nearly 60 subsea projects and a total of 330 trees going ahead this year. However, we are concerned that 2020 may not offer such a positive outlook for new development activity and that momentum could turn negative.

The weaker medium-term outlook reflects the impact of 2015-17 exploration and production (E&P) capex cuts and the cyclicality of the industry. Despite having a constructive view on offshore overall, we think it would be prudent to model cautious optimism for order intakes for 2020 and beyond. 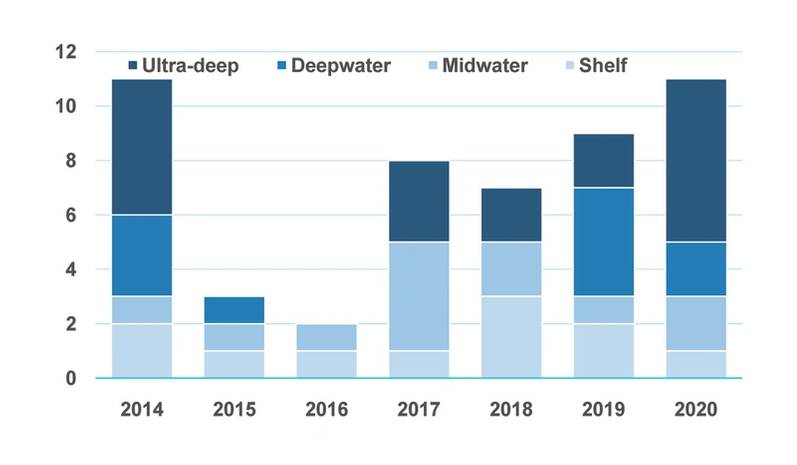 From the 2016 trough, order intake has rebounded; for subsea trees, the market has grown fourfold. Just 78 trees were awarded at the bottom of the market. For 2019, we think that more than 330 will be ordered, but to expect another year of +/-30% growth in a cyclical market looks far too optimistic to us. While we believe that the supply chain would be able to handle such an increase without incurring material cost inflation, the projects pipeline looks insufficient at this stage to underpin another year of such solid growth.

As well as a lack of projects in the pipeline, recent oil price volatility has compounded the issue. Downward pressure has softened medium-term confidence. In some cases the uncertainty has caused development portfolios to be reassessed, with upstream companies unwilling to catch the falling knife and FID a project in the midst of an oil price slide. The subsequent delays in finalizing concept selections have seen several project timescales slip to the right, while procurement teams have hesitated to move projects through decision gates.

The impact of these delays is that subsea orders could cool in 2020, and that FPSO orders will likely remain broadly flat. We expect around 290 subsea trees to be awarded, alongside 19 FPSOs over the course of 2020. Although perhaps disappointing in terms of momentum, this forecast should be viewed in the context of how bleak the market was between 2015 and 2017, and in light of oil companies’ newfound commitment to capital discipline and flat capital expenditure budgets. The market is still likely to offer far more opportunities than those that were presented during the downturn.

While we advise caution for the market overall, we are more optimistic on deepwater. In particular, we are confident that the Brazilian pre-salt market will drive growth for the industry. We expect well over 100 trees to be awarded over the next four years, along with 13 FPSOs. These will provide opportunities for the domestic and international supply chains, from engineers, through to rigs, pipe makers and offshore installation work. Among the FPSOs we expect to go ahead, we highlight the two replacement Marlim FPSOs and the second Mero vessel as strong candidates for award in 2019, along with Buzios 5. Moving into 2020, we expect the market to benefit from the opening up of pre-salt fields to international operators and investment. Equinor is likely to FID the Carcara vessel alongside the likes of Petrobras’ Itapu and Parque das Baleias projects.

Beyond Brazil, we’re encouraged by greenfield deepwater basins off Guyana and India which together are likely to offset the lack of progress off Mexico deepwater investment has been curtailed in the short-term by the decision to halt upcoming license rounds. The Angolan and Nigerian markets also offer opportunities for the supply chain, with Angola in particular offering a robust hopper of subsea tiebacks as Sonangol and its partners look to arrest a steep production decline. In Nigeria, we’re hesitant to call a deepwater recovery on the back of continued delays at Bonga Southwest and Zabazaba but do note the likes of Owowo and Preowei tiebacks as projects gathering positive momentum. 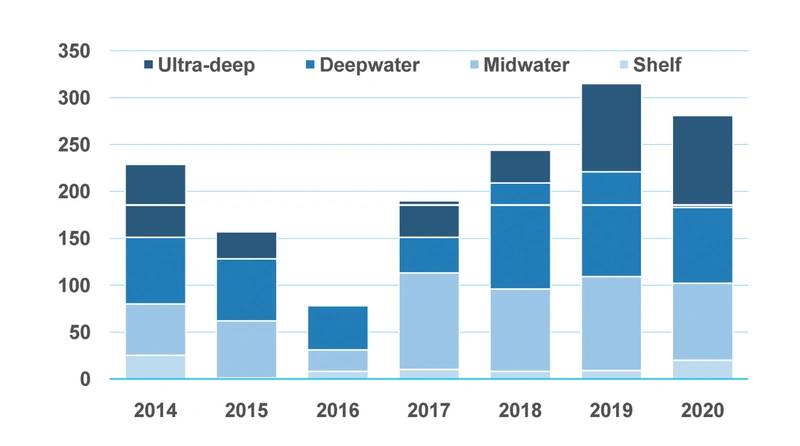 Beyond 2020 the lack of recent discoveries may weigh on the development hopper. While exploration and appraisal activity should be robust over the next 18 months, it will take time to filter through to project awards. The industry has made admirable progress in shortening lead-times but we do not think that they have shortened to such a point where larger projects can be discovered and developed en masse in less than three years which thus impacts our 2020/21 expectations materially.

The industry has made better progress on smaller tiebacks which offer faster paybacks. It is here we expect the bulk of investment in 2020, particularly for the subsea industry. The likes of Atlantic Phase 3 in the US Gulf of Mexico and Luno 2 are recent examples of incremental production being tied back into existing infrastructure and set a trend going forwards. We note that Lundin has a host of tieback candidates to the Edvard Grieg platform in the pipeline, while in the US, new seismic techniques adopted by the likes of BP have filled the pipeline.

Elsewhere in the Gulf of Mexico, independent E&P operators which remained committed to offshore through the downturn, such as LLOG, should be able to take advantage of the low-cost environment and FID the likes of Kahleesi, Mormont, Red Zinger and Nearly Headless Nick, among others over the next 18 months.

Looking to the longer-term and post-2021, the industry should start to benefit from greater exploration activity. We’re confident that FID activity should be robust with a host of opportunities across the North Sea, Gulf of Mexico, South America and elsewhere. Activity should be supported by heightened investment related to Asian projects, while Brazil is likely to be the single largest market.

For the near-term, the market may have recovered from the lows but we are far from the previous cycle’s peak, with no obvious route back to the summit. To see a return to 2012-2014 type levels of activity, and therefore pricing, looks far too optimistic given the uncertain macro climate.

For the supply chain, in the absence of a volume-based recovery, and in light of a cautiously optimistic outlook, the offshore industry should look to differentiated offerings and enabling nascent technologies to thrive in the new normal. Technology such as SBM Offshore’s Fast4Ward FPRO design that can accelerate time to first oil should help secure market share gains in a sector that looks to be structurally smaller than previous cycles.

The Author
Gregory Brown is Associate Director - Offshore, Maritime Strategies International Ltd. He leads the development of MSI’s Oil and Gas Project Tracker and delivers market consultancy, analysis and commercial modeling to MSI’s offshore client base of contractors, operators and the financial community.