The provider of safety and support vessels at sea Esvagt has provided support to Wavepiston during the installation of its wave energy device at the test site near Hanstholm, Denmark.

The ‘Esvagt Connector’ was in charge of towing the power system from port and three kilometres out at sea, Southeast of Hanstholm, and the crew managed the anchor handling and pulling the over 300-metre long chain, which is part of the device.

Esvagt’s help was much appreciated, says CEO Michael Henriksen, Wavepiston: "It is unquestionable that the crew on board the ‘Esvagt Connector’ know what they’re doing. It has been an absolute pleasure to cooperate with them."

"It is clear that Esvagt’s main focus is on the personnel’s and the equipment’s safety. They are on top of everything, which in turn results in a very serene and efficient process on site. We can truly learn from that," adds Michael Henriksen.

The satisfaction runs both ways, as Esvagt’s Head of Commercial, Ib Hansen, is pleased with the cooperation and the evident trust from Wavepiston: "Thanks to the ‘Esvagt Connector’ and other multirole vessels in our fleet, we are able to help our customers with a large range of tasks, including anchor handling and towing. These are areas where we can see a potential expansion, and we are pleased with the trust that Wavepiston has shown us, and the opportunity for us to demonstrate what we are capable of."

The ‘Esvagt Connector’ has previously solved unusual towing tasks, such as towing none other than The Royal Navy back in December 2015.

The test in Hanstholm was the last in a series of trials before launching full scale tests, which are expected to be completed between 2019 and 2021. Michael Henriksen expects that commercial wave power will be available during 2022. 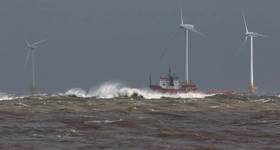