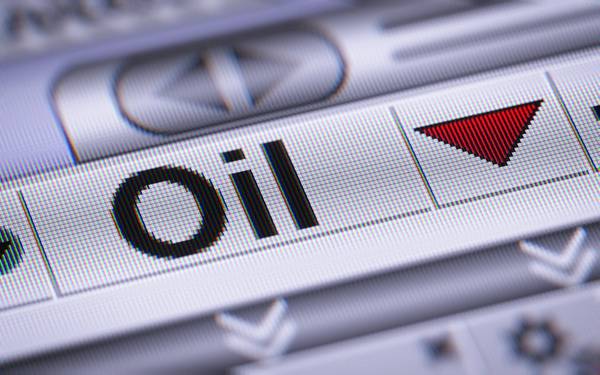 Oil prices dropped about 2 percent on Friday, weighed down by a falling U.S. stock market, while weak economic data from China pointed to lower fuel demand in the world's biggest oil importer.

Global benchmark Brent was set for a weekly loss of about 2.2 percent, while WTI was on track to decline 2.4 percent.

"The oil complex remains vulnerable to heavy selling into the equities especially when combined with a strengthening in the U.S. dollar as is the case so far today," Jim Ritterbusch, president of Ritterbusch and Associates, said in a note.

Chinese oil refinery throughput in November fell from October, suggesting an easing in oil demand, though runs were 2.9 percent above year-ago levels.

"The energy complex is on the back foot this morning as a batch of soft Chinese economic data triggers a flurry of pre-weekend profit-taking," PVM Oil analyst Stephen Brennock said.

Concerned by mounting oversupply, the Organization of the Petroleum Exporting Countries and other oil producers including Russia agreed last week to reduce output by 1.2 million barrels per day (bpd), or more than 1 percent of global demand.

"For the time being until the OPEC cuts start kicking in, the market is oversupplied in the short term," said Tony Nunan, oil risk manager at Mitsubishi Corp. "If China is slowing down, that's definitely a concern."

The International Energy Agency said on Thursday it expected a deficit in oil supply by the second quarter of next year, provided OPEC members and other key producers stuck closely to last week's deal to cut output.

As part of the agreement, de facto OPEC leader Saudi Arabia plans to reduce its output to 10.2 million bpd in January.

The IEA kept its 2019 forecast for global oil demand growth at 1.4 million bpd, unchanged from its projection last month, and said it expected growth of 1.3 million bpd this year.

Barclays said on Friday it expects oil prices to rebound in the first half of 2019 on falling inventories, Saudi Arabia's export cuts and an end to the Iran sanction waivers.