A new method of installing large subsea structures without the aid of a heavylift vessel is currently being introduced to the offshore engineering community by the Anglo-Faroese pairing of structural engineer David Paul and naval architect Arnbjørn Joensen, who reckon their Subsea Deployment System offers potential installation cost savings of 60-80% depending on the number of structures involved. Meg Chesshyre reports.

Hailed by its eponymous developers as ‘a potential game changer' for the development and installation of subsea structures, the Subsea Deployment System (SDS) is claimed capable of slashing 60% off the cost of multi-structure installations and up to 80% off single-structure installation costs when compared with using a heavylift vessel. It can also be used to install larger structures in greater water depths, they add, and in more environmentally hostile locations than is possible with current vessels.

Designed for the transportation and installation of large structures (300t to several thousand tonnes) in water depths ranging from 100m to 3000m without the need for a heavylift vessel, the SDS is said to enable even the smallest crane vessels to install very large subsea structures in hostile environments. Underpinning the system is a deployment vessel, the SDV, consisting of solid buoyancy modules mounted on structural steel frames. The amount of buoyancy is sufficient to render the combined SDV and payload slightly positively buoyant. With the SDV fully submerged throughout the installation process, surface weather conditions have little impact on the tow or lowering operations.

The complete assembly is transported to site using a submerged tow thereby avoiding the effects of the surface environment and also avoiding the need for an offshore lift. During final installation the position of the assembly can be controlled horizontally, vertically and rotationally by means of chains lowered into the SDV.

Arnbjørn Joensen takes up the story: ‘Once the structure has been landed on the seabed, ballast is added to the SDV to compensate for the weight of the subsea structure prior to disconnection. The ballast is deployed in several small batches to suit the capacity of the surface vessel crane, i.e. if the surface vessel crane capacity were 100t and the subsea structure weighed 1000t the total ballast would be deployed as 10 batches.

‘The potential for catastrophic failure during installation is minimised by having the submerged weight of the SDV and structure close to neutral,' he adds. ‘In the event of a rigging failure, the chain clump weight will either sink slowly to the seabed and act as an anchor for the SDV or the SDV will float to the surface. The SDV is provided with excess buoyancy and contingency ballast to be able to withstand some accidental loss of buoyancy.'

SDS the company came into being just over two years ago, headed by Joensen, a master mariner and naval architect who has devoted the past 10 years to the subsea industry and in particular the towing of large pipeline bundles, and Paul, a 30-year offshore oil & gas veteran who in more recent years has specialised in the design of subsea templates, manifolds and towheads.

The engineering principles behind the SDS are all simple, well known, tried and tested, according to its co-developers. The design, materials and construction of the deployment vessel are also based entirely on existing technology and consequently, there is relatively little development required to prove the system. However, a simple model test and detailed dynamic simulation have been performed and the results are reported to have been ‘extremely positive'. Further model testing is planned for this year. A UK patent has been granted for the system, with an international patent pending.

Both independently and via industry bodies and key players, SDS has been busy of late working on the ideal way to bring the concept to market. ‘We are working on the differing ways we can work with offshore operators and contractors to further develop the concept, but a partnership agreement may be the best way forward,' says Paul.

Words of encouragement for the SDS relating to its potential for subsea infrastructure removal as well as installation also came from Brian Nixon, chief executive of Decom North Sea, who added: ‘If the oil & gas decommissioning and offshore wind markets ramp up as forecast in the coming years, it is generally accepted that there will be a number of capacity restraints, including heavy lifting vessels.'

According to Joensen, the current alternatives to the SDS, which involve suspending the structure from either a narrow surface buoy or a fully submerged buoy, both have some restrictions regarding either lifting and lowering in hostile environments or extended tows to site. ‘However, the SDS essentially combines the strengths of these alternatives into a single system and also has some additional features,' he explains.

‘The SDS is suitable for shallow water loadouts,' he adds. ‘The SDV is fully submerged during the tow to site and is less sensitive to weather than when using a surface buoy. There is no tensile connection between the surface vessel and the SDV during lowering/lifting, resulting in minimal dynamic loading and reduced weather sensitivity.

‘The use of the control chains and towers provides lateral and rotational control in medium water depths. The SDS does not employ a hoist line attached to the structure and consequently there is a reduced chance of catastrophic failure. It is possible to safely suspend operations at any time during the tow or lowering/lifting operations,' adds Joensen. OE

How it works
When there is limited water depth at the loadout location, the SDV and structure will be towed in shallow draft surface tow mode until reaching a suitable location for flooding the hulls. The attitude of the SDV will be checked and adjusted as necessary.

In deep draught mode, the SDV and structure will be towed with only the castles (D) and control chain towers (A) breaking surface.

The tow vessel can adjust its speed and the length of the tow wire to maintain the SDV at a suitable depth. The SDV may be lowered as the water depth increases by paying out on the tow wire. The position and inclination of the SDV is monitored throughout by acoustic interrogation.

In deeper water the tow vessel may also be utilised to aid in positioning and heading control by lifting the tow wire and chain clump weight clear of the seabed. 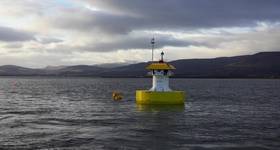 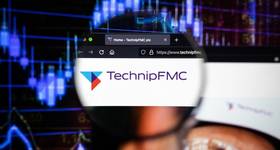