In 2008 the Van Ghent exploration well discovered an oil and gas field 4.5km southeast of the existing De Ruyter platform, located in the southern North Sea on the Dutch continental shelf approximately 60km west of The Hague. The exploration well encountered a thin 11m thick oil column below a 49m thick gas cap.

The previous exploration well had discovered the nearby Van Nes gas field and together the two formed the joint development called the Medway Project.

Medway is being developed using two subsea wells tied back via dedicated flowlines to the existing De Ruyter platform. Dana Petroleum is the operator and holds a 50% interest in the project, with the remaining interest held by Energie Beheer Nederland (EBN).

The Van Ghent and Van Nes discoveries lie 4.5km and 8km respectively from the De Ruyter platform (Figure 1). The development concept comprises two subsea templates tied back via a wye structure to the De Ruyter acilities, which allows for future expansion through possible additional discoveries (Figure 2). This strategy for development ensures that the number of wells is minimised to ensure high profitability while using the best available industry technology to maximise production.

Michiel van der Most is a reservoir engineer at dana Petroleum Netherlands, responsible for the company's and gas assets in the de Ruyter area in the Southern North Sea. He holds an mSc in petroleum engineering from delft University of Technology.

Dave McKellar is a well construction manager at dana Petroleum Netherlands. Since moving to the Netherlands in the late 1970s, he has held a variety of management positions with operators and has been an active member of the Netherlands Oil & Gas Exploration & Production association.

Suzanne Castelein is a senior geologist with dana Petroleum Netherlands. during her career she has worked on international field studies ranging from frontier areas through to brownfield developments, and for the past four years has focused on southern North Sea exploration and field development. Suzanne holds an mSc in Geology from the Free University of amsterdam.

A further complication is that the discovered reservoirs lie adjacent to very busy shipping lanes, limiting the choice of surface location. This precludes the use of conventional surface platforms which are a shipping hazard, and also complicates the geometry of any well.

A critical factor for the development of the Van Ghent field is the availability of two perfect analogues; one, the producing oil rim in the De Ruyter field and secondly the Van Brakel gas field.

The De Ruyter field consists of two compartments, one of which contains saturated oil with a gas cap. This reservoir is formed by a succession of dipping sandstones called the Volpriehausen and is Triassic in age. The sands are fairly homogeneous with

some silt/shale inter-bedded layers. The Volpriehausen reservoir has excellent properties, with porosities of 23-29% and average permeability of 250mD, with maximum permeabilities found in de Darcy range. Figure 3 shows a geological cross section of the Van Ghent field and Figure 4 shows a cross-sectional view of the porosity model, embedded in the seismic section.

Using the full core coverage of the Van Brakel field, the Volpriehausen reservoir was modelled statically and dynamically. The core data provided essential geological and petrophysical data for the static model as well as saturation and relperm data for the dynamic model.

The Van Ghent reservoir is found at roughly the same depth of Â±1700mTVDSS as the De Ruyter oil rim but has a larger variation in petrophysical properties and a thinner oil rim combined with thicker gas cap. The production history of this field proved the development concept for Van Ghent was technically feasible.

A range of well options were simulated, searching for optimal subsurface penetration, drillability and completability.

The chosen well concept is a tri-lateral well which combines a pilot hole to determine the fluid contacts, two long horizontal producers for the oil rim as well as a third leg into the gas cap. The oil laterals are twice as long as in the analogue De Ruyter field, resulting in 4000m reservoir coverage. Although this is a complicated well design, extensive dynamic modelling showed this to be the optimal oil and gas recovery method. Figure 5 shows a 3D artist's impression of the well path reservoir plot.

The multiple oil legs are required to recover the maximum amount of oil, however a significant part of the value of the field lies in the gas cap. While the oil laterals are designed to hold back gas breakthrough, they do not penetrate the crest of the gas cap.

This problem is solved by use of a third gas leg which can deplete the gas cap as well as assist in lifting the oil to the surface as reservoir pressure declines.

The tri-lateral well is designed to drain the oil from the oil rim and is capable of producing free gas above the oil rim. State-of-the-art drilling and completion technology was applied to deliver 8000m of wellbore, primarily using the latest rotary steerable systems (Figure 6 shows the complexity of the well path). One oil leg had a total length of 4400m of hole at less than 1800m depth.

The well was drilled using the jackup drilling rig Noble Lynda Bossler, which was modified to handle subsea trees and conduct diving operations.

Drilled and completed mid-September 2011 in 126 days, the well was briefly flowed for clean-up. Flow rates exceeded expectations and first production commenced in January 2012.

Key to the production performance of the well is the installation of passive Inflow Control Devices (ICD), combined with two downhole valves to control the oil and gas flows.

The full completion is shown in Figure 7. Passive ICD technology has become the worldwide standard for horizontal and highly deviated oil wells in the last five years. ICDs are specifically used in cases of high permeability contrast to minimise early water and/or gas breakthrough. They use the counter-intuitive principle of choking high permeability zones with higher fluid velocities, while favouring lower permeability streaks. This creates a more even inflow profile in the well, delays early breakthrough of water and gas and chokes the high mobility phase after breakthrough has occurred. The use of ICDs is therefore justified in oil rim developments to increase recovery from long horizontal low rate wells to optimally drain oil prior to the gas blow down phase.

Both types of developments are present in the De Ruyter area in the Netherlands and have successfully proven the concept of ICDs. The relatively modest reservoir size enabled Dana to verify the ICD theory in practice in a short time scale, giving the confidence to develop additional marginal fields by de-risking discoveries on the basis of actual production performance.

In the De Ruyter field the lower completions are equipped with passive ICDs, and production logging tools were subsequently run to prove the production profile from these wells. A dual-lateral producer was completed with ICDs to evenly drain the 22m oil rim in an adjacent block. Based on this success the tri-lateral well was completed with ICDs to maximise recovery from Van Ghent.

The Van Ghent well is currently producing as expected, almost doubling oil production on the De Ruyter platform. Critical to the successful execution of the project was the experience gained from working on other fields in the area with similar technical challenges. This knowledge enabled Dana to create the optimal solution for the Van Ghent well.

The integration of all disciplines from the start of the project in 2008, combined with the application of ICD technology transformed Van Ghent from a marginal to an economically robust development. OE 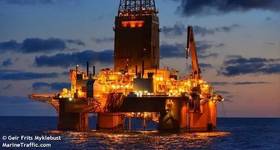