With 22 active heave compensated (AHC) cranes ranging from 10t to 250t currently operational on its vessels and another 17 on order, French offshore service provider Bourbon Subsea Services considers itself something of an authority on AHC crane capabilities. Patrick Belenfant, the company’s SVP business management, subsea services, discusses its key AHC learnings to date.

The company’s cranes are used to deploy subsea equipment such as well tie-in, rigid or flexible jumpers, xmas trees and mudmats. They are capable of replacing xmas tree control pods and chokes, assisting in the day-to-day deployment of ROV tool baskets, and providing diving support for riser and spool work or dredging operations.

Active heave compensation, facilitating the installation or retrieval of equipment in deep water regardless of vessel motions, has in recent years become a key enabler in the quest to increase operational safety, availability and efficiency offshore. In shallower water, AHC also allows crane lower operations to be conducted in close proximity to divers. Figure 1 (pictured right) shows the 40t and 150t active heave compensated cranes onboard the Bourbon Evolution 800, which can operate in water depths to 3000m.

Depending on weather conditions, the crane damping factor achieved is greater than 80% of the boom tip motion; in other words, a 2m boom tip motion will be reduced at least at hook level to 400mm. Improving on that performance depends on a number of factors, not least crane installed power, accumulators size, hydraulic circuit pumps design and metocean conditions.

The table provides an outline of power installed on electro hydraulic AHC crane versus load.

Crane specification defines maximum heave, speed and acceleration depending of the expected period. Since vessels are built for large areas of operation, wave and vessel RAO (response amplitude oscillation) needs to be taken into account in AHC crane or winch selection. Crane makers accept heave, speed, acceleration versus period, while contractors and oil companies are looking at a damping factor once crane is installed. As a shipowner, Bourbon Subsea Services specifies its crane depending on the vessel RAOs and area of operation: West Africa, Brazil or North Sea, the Far East area representing the whole wave spectrum of the other three areas.

Figure 2 shows the 3000m-rated Bourbon Oceanteam 101, with its 150t AHC crane, installing a rigid jumper. Without an AHC crane, the jumper, which must be landed between a manifold – which might be ‘live’ – and a subsea tree, would bounce up and down above that costly equipment by between 1m and 3m, depending on vessel motions and weather conditions.

End jumper connections are usually equipped with a stabbing pin or guide funnel 0.5-1m high to provide a guiding system for vessels without an AHC crane. The guide cone system does not reduce the landing energy of a 10-20t structure, whereas an AHC crane/winch has the advantage of reducing the landing energy, heave, speed and acceleration of the load.

Field experience based on 200 jumper tie-ins and the installation of 100 xmas trees indicates that the achieved heave at depth with regular waves has in most cases been in the range of 100-200mm, much less than the guide cone. With irregular waves, the heave achieved would be between 100-400mm depending on modeling into PLC, load and swell conditions.

Having demonstrated that jumper tie-ins could be carried out by AHC crane, the logical next step was for Bourbon Subsea Services to extend the service to the installation of xmas trees, usually installed by drillpipe with active heave compensation system from a rig.

As an example, for the Agbami project in 1420m water depth offshore Nigeria, Bourbon Emerald deployed three trees in less than 24 hours, locked with seal tests completed in the following 24 hours. This represents one third of the rig time with a vessel operating cost being 1/5 to 1/10 of a fully equipped rig.

Each 55t (weight in air) tree was deployed in 1420m water depth in normal lowering mode, then AHC mode activated at depth. Switching on the AHC reduces the effect of the hydrodynamic load on such structure by between 2% and 5%.

One of the side advantages of an AHC crane is the inclusion of constant tension mode functionality (CT). This mode is used to pull load from subsea when there is a risk of suction causing the load to be locked. Theoretical engineering calculations suggest that a large 20t mudmat with skirt pile, for example, may require a pullforce up to two to five times static weight.

Using CT mode, the crane operator starts to apply tension at 20t to overcome the weight of the load and slowly increase reference load. If load exceeds the selected value, wire is paid out; if the load is below the selected value, the wire is paid in. When the ‘break’ suction force is reached, the mudmat will be lifted. At this time, with its load clear of the seabed, the crane switches to AHC mode to regulate the motion.

If the crane had operated in normal mode while pulling this type of load, the crane load will vary significantly between 20t and 80t with a possibility of exceeding crane safe working load and generating significant snap load.

The 39 AHC cranes Bourbon Subsea Services will own and operate by 2013 are provided by three different manufacturers. In order to provide the necessary reliability and expertise, Bourbon has developed in-house electro-hydraulic crane expertise both for maintenance and to leverage the company’s lifting engineering expertise developed during seven years of handling substantial loads in different conditions up to 2500m water depth, enabling it to validate or invalidate critical lifts.

Having operated an AHC crane since 2004, Bourbon undertakes its own crane fatigue life analysis. Cranes are designed for a certain number of lifts depending on a load spectrum determined by FEM, the European materials handling federation. One of the beneficial side effects of AHC mode is a reduction in the snap load that can accelerate crane fatigue. Based on running hours, number and weight of loads lifted, the water depths involved and the dynamic amplification record over seven years of AHC crane operation, a Bourbon study indicates an equivalent load spectrum of 0.20 instead of 0.25. Assuming a future load spectrum of 0.20 leads the company to conclude that the remaining life of an AHC crane is 136,000 cycles compared with approximately 90,000 cycles for a non-AHC crane.

In conclusion, besides ensuring safer operation, for example during diver assistance work, it is clear to Bourbon Subsea Services that AHC mode shortens installation time by increasing the operational weather window. It will also reduce subsea equipment design costs by obviating the need for guide posts and reducing the energy required in landing a subsea structure. OE

Patrick Belenfant, senior vice president business management of Bourbon Subsea Services, graduated from the French Mechanical School of Engineering (ECAM ) in 1989 and has since accumulated more than 20 years’ oil & gas industry experience worldwide as a project manager and engineering manager. He joined parent company Bourbon in 2001 and was instrumental in the creation and development of its subsea services arm, as well as supervising and managing the operations of Bourbon’s worldwide fleet and ROV services. 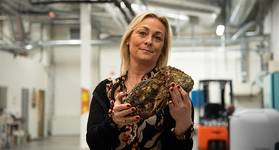