Last year, Turkey approved construction of the South Stream pipeline through its territory, which will bring Russian gas across the southern Black Sea and into Europe. Construction should be completed in 2015, with the offshore component costing US$13 billion. The largest stakeholder is Gazprom (50%), followed by Eni (20%); EDF and Wintershall each hold 15% of the project. Construction of the eastern section through Bulgaria’s offshore territory is scheduled to begin in June and be completed by 2017.

The Trans-Adriatic Pipeline (TAP) will transport gas from the Caspian region through Greece and Albania, then across the Adriatic Sea into southern Italy where it will connect into western Europe. The project is aimed at enhancing supply security, as well as supply diversification for European markets by expanding delivery capacity from 10bcm to 20bcm per year. TAP will open a new ‘southern gas corridor’ to Europe and establish a new market outlet for Caspian natural gas. The designers also plan to include the ability to physically reverse up to 80% of the flow to ensure security of supply during any operational interruption. Shareholders include Switzerlandbased Axpo Group (42.5%), Statoil (42.5%) and Germany s E.ON Ruhrgas (15%).

TAP and E.ON New Build & Technology (ENT) are engineering the onshore segment of the project, and have implemented a two-staged prequalification for steel pipe suppliers. TAP will require 400,000 tonnes of steel pipe to lay about 800km of 48in pipeline over a three-year construction period. In 2015, TAP contractors will begin connecting the Shah Deniz II gas field off Azerbaijan to European markets. First gas is expected to flow by the end of 2018.

The governments of Albania, Greece, and Italy recently demonstrated their commitment to TAP by signing a tri-lateral intergovernmental agreement (IGA). The IGA solidified the countries’ commitments to the development, construction, and operation of TAP. Within the framework of the Community Treaties and the Energy Community Treaty, the IGA ensures that the states cooperate in the timely delivery and efficient operation of the pipeline. 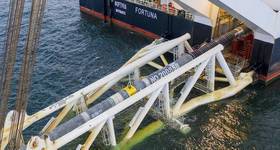 State Dept: Nord Stream 2 Will Not Move Forward if Russia...