Royal Dutch Shell plc (Shell) has announced a final investment decision in the Stones ultra-deepwater project, a Gulf of Mexico oil and gas development expected to host the deepest production facility in the world.

This decision sets in motion the construction and fabrication of a floating production, storage, and offloading (FPSO) vessel and subsea infrastructure.

The development will start with two subsea production wells tied back to the FPSO vessel, followed later by six additional production wells.  This first phase of development is expected to have annual peak production of 50,000 boe/d from more than 250 million boe of recoverable resources.  The Stones field has significant upside potential and is estimated to contain over 2 billion boe of oil in place.

“This important investment demonstrates our ongoing commitment to usher in the next generation of deepwater developments, which will deliver more production growth in the Americas,” said John Hollowell, Executive Vice President for Deepwater, Shell Upstream Americas. “We will continue our leadership in safe, innovative deepwater operations to help meet the growing demand for energy in the US.”

The Stones field is located in 9,500 feet (2,896 meters) of water, approximately 200 miles (320 kilometers) southwest of New Orleans, Louisiana, and was discovered in 2005. The project encompasses eight US Federal Outer Continental Shelf lease blocks in the Gulf of Mexico’s Lower Tertiary geologic trend. Shell has been one of the pioneers in the Lower Tertiary, establishing first production in the play from its Perdido Development.

An FPSO design was selected to safely develop and produce this ultra-deepwater discovery, while addressing the relative lack of infrastructure, seabed complexity, and unique reservoir properties. With an FPSO, tankers will transport oil from the Stones FPSO to US refineries, and gas will be transported by pipeline.

Shell holds 100% interest and will operate the Stones development. 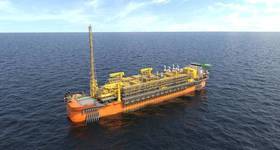