According to the US National Weather Service, lightning strikes occur worldwide as often as 100 times per second. Not only are lightning strikes more frequent than many people realize, but they are highly unpredictable and can cause great damage, especially to locations with flammable materials or highly sensitive electronic equipment. For this reason, the oil and gas industry is particularly vulnerable to the dangers of lightning.

Though lightning is less likely to strike over open water, there is still a risk to rigs and platforms—a risk that is only growing. In fact, changes in global weather patterns are producing a large number of lightning strikes in areas where lightning has historically been scarce. Lightning’s effects are on the rise worldwide and are expected to strike with more frequency. Areas and industries that have previously not seen its devastating effects will almost certainly be impacted in the future.

A single lightning strike can cause catastrophic damage, costing millions in downtime, product loss, and liability. For example, a storage tank in Kansas City in 2008 caught fire to 1.2 million gallons of gasoline after a strike, and in 2012, in Malaysia a similar incident resulted in a US$40 million loss. Before installing lightning protection, an ExxonMobil facility in Singapore lost nearly a day of work each week due to crewmembers being forced to safety zones when the region’s lightning alarm activated.

Fig 1: A DAS system includes a large-radius hemisphere with an array of many thin, metal splines with sharpened tips distributed evening over the surface.

According to the National Lightning Safety Institute, lightning damage and related losses exceeded $5 billion in 2009. Even though private home insurance claims for lightning strikes are down, the total paid out by insurance companies has gone up—largely due to electronic devices’ sensitivity to lightning’s secondary surges. Reports from Lloyd’s and the Insurance Information Institute suggest that lightning-related losses rose 15% from 2009 to 2010. With lightning events on the rise and these potential losses looming, many industries are searching for proactive ways to mitigate their risk and protect their facilities from loss and damage.

A common misconception is that offshore rigs and platforms are “grounded” to the ocean and therefore not in danger from lightning. However, the truth is that the advanced electrical and electronic systems on offshore rigs can be particularly vulnerable to both direct strikes and secondary surges— and of course, personnel are in danger as well. Upstream operating companies such as Transocean, Chevron, Texaco, ExxonMobil, and BP are looking for solutions to avoid downtime, without compromising productivity and safety during bad weather.

Lightning protection is not a new concept, dating back to the 1700s when Benjamin Franklin experimented with kites and keys. Traditional lightning rods work by collecting lightning; they attract strikes and convey the energy to the ground rather than to the structure they are protecting. This technology has been used for more than 200 years, and has been very effective in protecting buildings and other structures from the physical effects of direct lightning strikes, such as fire.

Of course, attracting lightning is not ideal for facilities that have flammables and other sensitive materials, where using an attractor carries the risk of ignition or damage to electronic systems. Fortunately, there is an alternative. Charge transfer technology prevents direct lightning strikes to protect these valuable assets. Lightning Eliminator’s dissipation array system (DAS) prevents a strike from occurring within a zone of protection by collecting the induced charge, developed by storm clouds, and transferring the charge through an ionizer into the surrounding air.

The DAS system is available in varying shapes and sizes but typically consists of a large radius hemisphere with an array of many thin, metal splines with sharpened tips distributed evenly over the hemisphere’s surface. The DAS system is usually installed on the top of the structure to be protected (Fig. 1). This technology is based on the hypothesis that producing positive space-charge in the region around the DAS reduces near-surface, electric-field strength to levels below which lightning streamer formation is likely (Fig. 2). With no streamers emanating from the structure of concern, the lightning leader is more likely to connect to streamers originating from either unprotected adjacent structures (man-made or natural) or from any air terminals installed on these unprotected structures.

The principle is consistent with Gauss’ electric field divergence law, which states (in one dimension) that the vertical growth of the electric-flux density is proportional to the spacecharge density. If this space-charge density is positive near the surface (which is the typical case during a negatively-charged leader approach), then the electric field increases to its peak strength near the leader tip from a surface value near the protected equipment that is lower than if the space charge were not present.

As a result of this lower near-surface field strength, there is less likelihood of streamer formation near the protected equipment, and hence less likelihood of leader-streamer connection. The principal of operation rests on the DAS being able to rapidly emit ample space charge during the time of leader approach. Accordingly, the DAS design attempts to maximize spacecharge emission, but without generating streamers of its own.

A study was done at the Browns Ferry Nuclear Plant (BFN). BFN is an excellent test case for this lightning protection technology, since the science and methodology for protecting any facility is the same.

The weighted data for strikes showed that although lightning frequency increased nearly 65% in the 3-, 6-, and 10mi radii around the stack, in the three years after DAS implementation, an 80% reduction in lightning strikes was realized within 500m of the stack. The result has been no lightning strikes to the off-gas stack since installation.

An array of thin metal splines with sharpened tips evenly distributed over a large-radius, hemispherical surface (LPAS) can control the process of lightning discharge into the protected tall structure by injecting the corona space charge into the air-gap cloud structure.

The presence of the corona space charge in the gap smoothes the redistribution of voltage across the gap, so the initiation of the upward leader from the structure becomes impossible under the influence of only the electrical field of a thundercloud.

The LPAS of a large diameter and the thousands of splines decreases the equivalent radius of attraction several times compared with the lightning rod of the same height. That results in a decrease of the total number of lightning strikes to a tall structure by an order of magnitude.

To date, Lighning Eliminators (LEC) has installed over 3000 lightning protection solutions in more than 70 countries and throughout the United States, including recent work on offshore platforms in Mexico, Egypt, Nigeria, Malaysia, and South Korea. The company is currently experiencing the most growth outside of the United States, in countries like Qatar where companies are being proactive about the future dangers of lightning, including on and offshore facilities.

Lightning threats to the offshore community are very real. Thermodynamic processes generally start near shore with the potential to evolve into open water events. Rising temperatures worldwide are causing this increase in the frequency and severity of lightning strikes.

In 2012, LEC produced lightning protection solutions for nearly a dozen different companies’ offshore platforms and rigs. Many of these included the DAS nostrike protection system to prevent future costs associated with lightning strikes.

Fig 4: Each lightning protection solution is tailored to the structure's need, note DAS on top of the drilling tower.

Of course, the potential danger isn’t only from direct strikes. Secondary surges also wreak havoc on electrical instruments and equipment and protecting this sophisticated equipment is a concern in the energy industry. Dynamic positioning, drilling instrumentation, and other rig management systems are essential to the facility staying online, and are vulnerable to lightning effects. Systems that work to prevent, rather than attract, lightning take these secondary surges into account as well.

The meantime-between-failure for sensitive systems is an important consideration in damage mitigation and loss calculation. The voltage needed to run instrumentation controls decreases as the systems become smarter and more efficient, although they become more intricate and vulnerable. The risk of a high-end secondary surge damaging equipment and affecting the operations also rises. Because not every case is the same, work with offshore rigs and platforms begins with a risk assessment. LEC engineers interview key personnel, review schematics and wiring diagrams, and inspect in situ grounding practices. Last year, vulnerability studies based on International Electrotechnical Commission (IEC) and National Fire Protection Association (NFPA) guidelines and standards resulted in solutions for nearly a dozen companies’ offshore platforms and rigs.

Each lightning protection solution can be different as well, tailored to specific needs revealed in these site surveys. Some rigs may only need surge protection devices, which have become critical to protecting power distribution and low-voltage instrumentation and control. Others may require a no-strike system that will provide security against lightning strikes on the helipad, drill derrick, or jackup legs (Fig. 4).

In implementing these solutions, engineers work to improve the level of safety for the workforce, protect the vessels and facilities against direct strikes, as well as secondary surges, reduce downtime and associated costs, and extend facility life through preventative measures. Protecting a vessel from lightning strikes also works to protect systems that otherwise would have lost a considerable portion of their lifespan. In today’s uncertain economy, many companies are looking for costeffective protection as a way to extend the lives of older vessels and work toward being more risk averse with new construction.

The reliability rate of over 99% comes from data from over 3,500 systems. Results like these have led to some of the world’s largest offshore producers to look into protecting themselves from the negative effects of lightning, providing a critical safety net for their equipment, personnel, and bottom line. OE

Peter Carpenter has more than 26 years experience in electronic engineering and lightning protection. Since 1988, he has been the director of applied engineering at Lightning Eliminators and Consultants. He has assisted in many field evaluations to solve past bonding, grounding, power conditioning, and lightning-related electronic failures. Carpenter studied electrical engineering technology at Cerritos College, Norwalk, California. 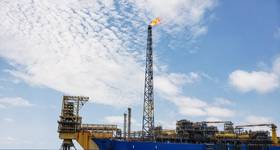