The Dolphin Geophysical seismic vessel, Artemis Atlantic, is currently acquiring 1500km of 2D seismic data in Blocks 1, 2 and 3 of Area 3 north of Malta.

Malta's Minister for Transport and Infrastructure, Joe Mizzi, visited the vessel while it was berthed at Valletta Harbour, on 26 March 2014, accompanied by representatives from Cairn Energy PLC and Mediterranean Oil & Gas (photos at right).

Dolphin says it is using state-of the-art acquisition and processing techniques that allow for better image definition of the deep subsurface. The survey is expected to last for about 20 days. Data processing is expected to be completed by early summer and interpretation of the data will be finalized by the end of the year. 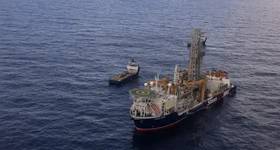 Chevron Gets More Time to Drill Appraisal Well at Offshore...