The RS, who surveyed the transfer and will survey future operations, said that attachment and installing the LQP-1 topside to the substructure will begin as weather conditions allow. The ice-resistant fixed platform was laid down at OOO Galaktika shipyards in Astrakhan on 29 May.

LQP-1 is one of several components comprising the development, which in addition to LQP-1 includes an ice-resistant stationary platform for drilling operations, a central processing platform, and a riser block, connecting connect the infield pipelines and export pipelines. All will be interconnected with bridges, and the platform is planned to be connected to Yury Korchagin fields.

Around 15 directional wells will be drilled from the platform, with horizontal hole injection: nine will be for production and six for injection, for field pressure maintenance.

So far, the development is proceeding along OAO Lukoil’s proposed timeline. The next major milestones are commercial drilling, set to begin in 2015, and first oil, expected in late 2015 or early 2016.

Vladimir Filanovsky field is in the the Severniy license zone, 170km south of Astrakhan and 20km east of Maliy Zhemchuzhniy Island. Discovered in 2005, the oil and gas condensate field is said by the RS to be the largest oil field discovery in the last 10 years. Lukoil estimates С1+С2 oil recoverable reserves total at more than 153 million tons, and category С1+C2 gas reserves at more than 32.2Bcm.

Image of the topside transport from Russian Maritime Register of Shipping. 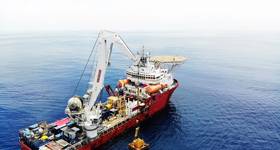