UAE-based Lamprell has delivered the delayed Ensco 140 newbuild jackup to Ensco, after signing an agreement with Ensco to settle all claims arising from the late delivery.

The settlement agreement comprises a deduction of US$25 million from the final milestone payment in respect of the late deliver, which was due to failures in the jacking equipment that equipment manufacturer, Cameron LeTourneau (Cameron) supplied.

As part of the settlement, Lamprell said it will also provide additional services for the Ensco 140 and 141 rigs, including temporary storage and grant an extended warranty for the jacking equipment supplied by Cameron. As a result of the settlement agreement, Lamprell's expected 2016 revenue will be reduced by $25 million and the company anticipates a reduction of around $35 million on its expected 2016 profit.

Further guidance for financial performance will be provided at the time of the announcement of the group's interim results on 22 September 2016. Lamprell retains a positive net cash position and a healthy balance sheet which will be strengthened as the Group completes and delivers the six ongoing rig projects over the coming eight months. The late delivery of the "Ensco 140" rig was caused by failures in the jacking equipment that Cameron supplied. Lamprell has successfully implemented a solution for this issue on the "Ensco 140" rig and the Group expects to deliver the other six projects as planned.

Lamprell's Board is fully committed to recovering the remedial costs arising from the technical defects in the jacking equipment from Cameron as well as seeking compensation from Cameron. 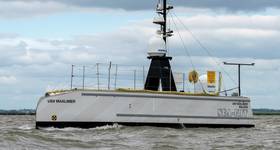 SEA-KIT's USV to be Powered by Hydrogen Fuel Cell