When KBR bought out JGC's near 45% stake in MW Kellogg earlier this year making it a wholly-owned subsidiary, the resulting ‘London Operating Centre' – combining major UK bases in Greenford and Leatherhead with over 2600 staff – emerged as KBR's largest entity globally. As part of the restructuring, the MWKL and KBR names will be consolidated and, going forward, will be known solely as KBR. Meg Chesshyre catches up with Albert Allan, the Scot tasked with heading up London Operating Centre operations.

Highlander Albert Allan has worked for KBR man and boy, starting out with Highland Fabricators, then owned by Brown & Root, 23 years ago as a young production engineer. ‘I actually vowed never to work at the production yard,' he recalls today. ‘My father, my two brothers, and two of my three sisters worked at Nigg, and because of the cyclic nature of the industry, coming to the end of each project (my Dad was on tools), it was redundancy until the next project. But as soon as I finished college the first job I got offered was at Nigg, because I had an electrical background, and there weren't many electrical engineers in the north of Scotland at that time.'

After three years at Nigg he joined competitor McDermott at its Ardersier yard, citing a number of reasons: more money, more work and the opportunity to live in Inverness, which ‘was the place to be at the time'. Then the Barmac joint venture between Brown & Root and McDermott happened, and the two yards, which had been competing against each other, joined forces. ‘Very similar to what we are doing in London now, and I was asked to help manage the one yard operation using the best resources, the best facilities of the two yards.'

Allan returned to the Brown & Root fold 17 years ago. At the time there were 4000-5000 people between the two yards and their various manufacturing shops, for which Allan ran the engineering on behalf of the joint venture. He was also asked to project manage a number of jobs run out of Ardersier at the time, including components for Texaco's Petronius compliant tower in the Gulf of Mexico.

He says he saw the writing on the wall ten years ago where UK offshore fabrication work was concerned and accepted an offer to move to London in a head office project control role, graduating to director of operations at Leatherhead seven years later. With KBR's buyout of the JGC Corporation's 44.94% interest in MW Kellogg at the start of this year, he was appointed to head of operations for the company's new-look London Operating Centre.

KBR has completed a number of studies for the floating LNG business, marrying process technology skills with offshore modular hull design. Shipowner Höegh LNG and KBR executed an agreement in May last year for long-term co-operation within the LNG FPSO segment, under which KBR is Höegh LNG's topside engineering partner for its LNG FPSO projects.

The first phase of the co-operation for KBR involves the performance of studies and basic engineering or FEED, as instructed by HLNG. The scope of the second phase to be undertaken by KBR will include execution of topsides detailed engineering and procurement services, project management services, construction management as well as integration and commissioning supervision as may be required for each specific project.

Allan comments: ‘The good thing is instead of pigeonholing employees to one type of sector ie LNG or downstream, we can enhance people's career opportunities by giving them a wide spectrum of projects. Our employees can work on a downstream project, then the next project could be a fixed platform, then an FPSO. We already see the benefits in terms of career development and retention.' KBR has mobilised a dozen graduates to work on an LNG plant, but in module fabrication yards in the Far East, which would help them whether they were working on LNG or offshore projects. It was also inviting graduates to Azerbaijan to work on a gas plant, but that was coming under the offshore business.

He says the company has not experienced any particular problems with skills shortages. It took on over 65 graduates last year between the two offices, and was hoping to increase its graduate intake to 80+ this year. The company has been able to pick up graduates with a year or two's experience, he says, because some companies have stopped developing their graduate programmes. KBR also continues to grow the number of apprentices under its patronage.

‘We've got a great graduate programme and our clients have been very supportive in allowing us to take graduates on to their projects,' notes Allan. ‘They themselves see there could be a skills shortage in five years.' He offers as an example the Chevron Gorgon project offshore Western Australia, which had ‘a great team including people who had come up through the graduate scheme and are now taking key roles'. He cites BP's Caspian projects as another example.

Stressing the importance of local content in today's global upstream business, Allan points out that KBR has opened up an operations centre in Angola to support the drive for local content. Eight Angolans have just returned home after spending a month in the Leatherhead office working on the Total CLOV project and being trained up in KBR tools and systems. The next phase of recruitment in Angola is already under way. Most of the 85 locals in the Kazakhstan operations office, also opened last year, have spent time in London getting acquainted with KBR processes and systems. A number of Kazakh graduates have now returned to their home country to work on the Agip KCO Kashagan project after undergoing training in London. According to Allan, a lot of the current work is multi-office work, so it is important that each office operates in the same way. The Gorgon project, for instance, was being executed out of Greenford, Leatherhead, Singapore, Jakarta, Perth, and a partner's office in Indonesia. It was, therefore, key to have standard tools and systems – ‘the KBR way' – used across all these offices, he says.

The company's Greenford and Leatherhead offices are now being run as a single operation with one management team developing and implementing the plans to ensure resources, skills sets and office capacity are available to meet business unit and client requirements. ‘It is really the best use of resources wherever they are located,' Allan notes. This is also the case for KBR subsidiaries Granherne and GVA, he adds, where KBR London has been able to help with peak loading.

Allan is upbeat about the future. In his view the company has emerged unscathed from the downturn over the last couple of years and is now seeing continued growth potential for the London Operating Centre. ‘We believe that we are in third gear, and we can go up to fourth or fifth gear, so there is a lot more to come from KBR.' With the greater capacity offered by the combination of its two London offices, KBR is currently executing over 200,000 engineering manhours a month. When the capacity of KBR's engineering offices in Jakarta and Monterrey and KBR's other Operating Centres around the world are added to that of the London office, and considering that these experienced resources are all using the same proven tools and procedures, KBR presents a compelling case to its client base, according to Allan.

‘I think we are well positioned to benefit from what seems to be an uptake in projects globally,' says Allan. He sees the emerging floating LNG market as an opportunity going forward, adding: ‘I believe I am young enough to see it happen.' OE 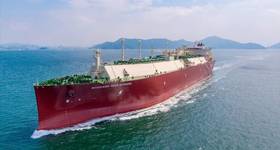