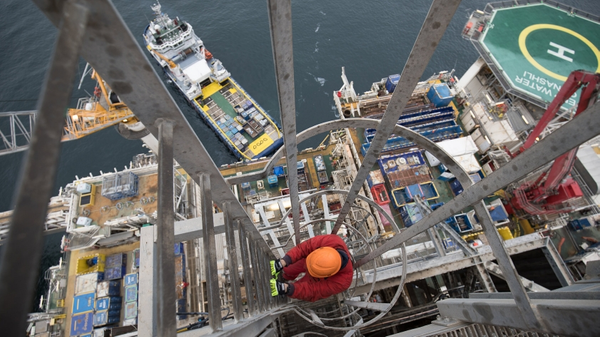 Photo: BP
British oil major BP, which operates a number of oil and gas fields in Azerbaijan, plans no maintenance shutdowns of platforms there this year and intends to advance with new projects, BP's regional president told Reuters.
"There aren't any turnarounds planned for this year. I think there are some planned for 2019," Gary Jones, BP's head for Azerbaijan, Georgia and Turkey, said.
He said the company would use different ways to conduct inspections, including the use of drones, to minimise the need for any shutdown.
BP operates the giant Azeri-Chirag-Guneshli (ACG) oilfields in Azerbaijan as well as the Shah Deniz gas fields.
The company said on Friday ACG oil output in 2017 edged down to 588,000 barrels per day (bpd) from 630,000 bpd the year before.
Natural gas production from the Shah Deniz offshore fields was 10.2 billion cubic metres (bcm) and condensate output came to 2.4 million tonnes, down from 10.7 bcm of gas and 2.5 million tonnes of condensate in 2016.
Jones declined to specify oil and gas output projections for this year, but said BP was trying to reduce declines in oil production to a minimum.
"Globally we are trying to keep (oil output) declines in a range of 2.5-5 percent per year."
BP and Azerbaijan last year extended to 2050 the agreement to develop the ACG, a deal dubbed "the contract of the century" when first signed in 1994. The arrangement was initially due to run until 2024.
Jones said the Southern Gas Corridor, a project of pipelines to bring gas from Azerbaijan to Europe, "was running ahead of schedule and ahead of budget".
He said BP would continue investment in ongoing projects as well as new ones.
In 2018, the company plans to explore three prospective areas in shallow waters off the Absheron peninsula, as well as engineering investment for the Central-Eastern Azeri platform, and seismic work on block D-230.
"We hope to sign a production-sharing agreement with SOCAR on D-230 block this year, very soon," Jones said, referring to the Azeri state energy company.
He added that drilling a first exploration well on the Shafag-Asiman block was planned for 2019.
By Margarita Antidze
People & Company News Finance Energy Fuels & Lubes Offshore Energy