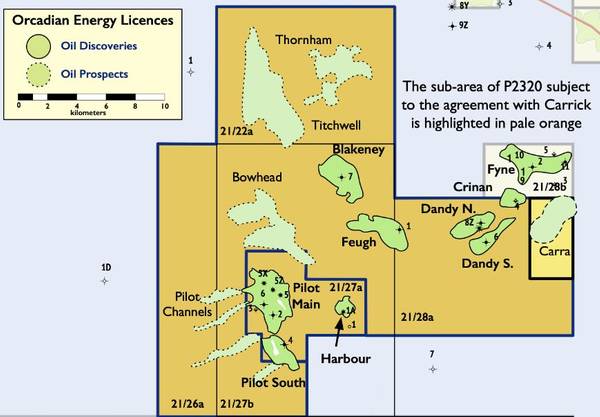 The deal, based on the fulfilment of certain work milestones, centres on a sub-area of Licence P2320 which contains the the Carra prospect.

Carrick will review existing data, acquire a licence to, and reinterpret, the seismic data currently being reprocessed by TGS relating to the Carra prospect, and remap the prospect.

In return, on completion of the updated mapping, Orcadian will, subject to North Sea Transition Authority approval, assign a 50% interest in the sub-area of licence P2320, which contains the bulk of the Carra prospect, to Carrick.

The Carra prospect lies to the East of the Crinan and Dandy discoveries and to the South of Fyne. The Carra prospect is contained in Tay and Cromarty sandstones which lie on trend with Guillemot West, and is a stratigraphic trap associated with a clear amplitude anomaly defined by 3D seismic. The Carra prospect is undrilled and unexplored, but Orcadian's early, internal estimates from Carrick indicate there is the potential for it to contain P50 recoverable prospective resources of 30 MMbbls of medium gravity oil.

Carrick may withdraw from the agreement prior to completion of the remapping of the prospect. This work programme is anticipated to take four months.

Carrick has agreed that after the transfer, it will then work up the Carra prospect to drill-ready status and manage a further farm-out process on the prospect.

By entering into this agreement with Carrick, Orcadian is building upon the long experience of the Carrick team in this area and is maximising the potential of this undrilled prospect.