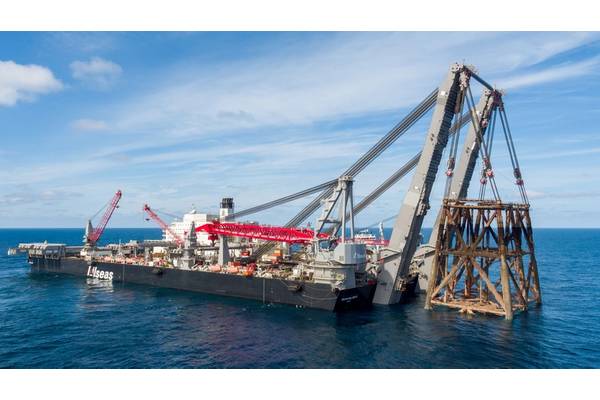 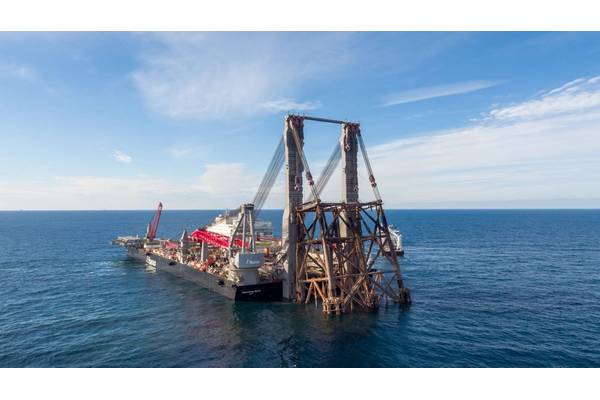 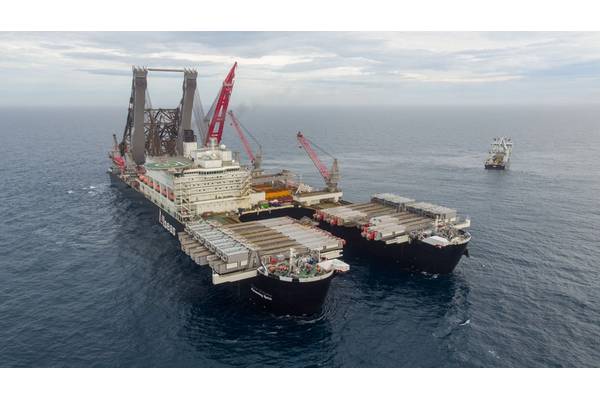 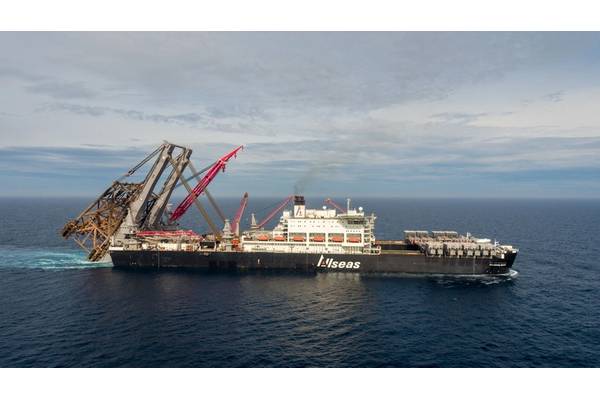 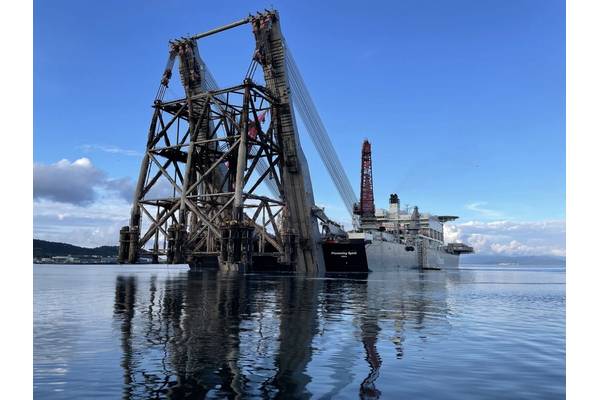 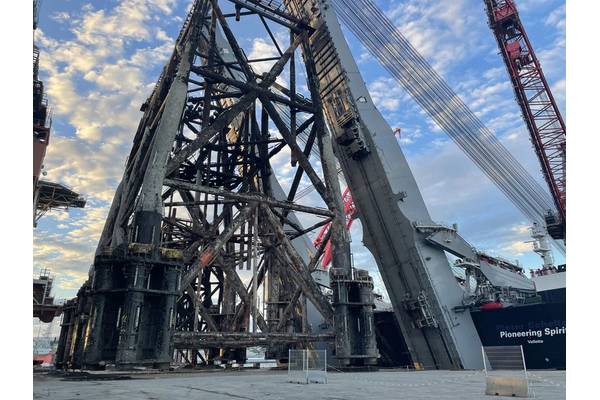 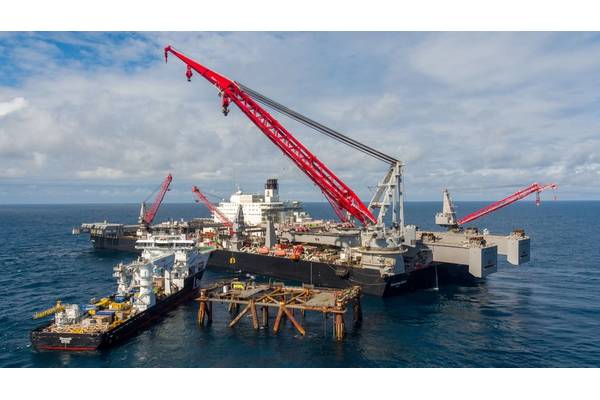 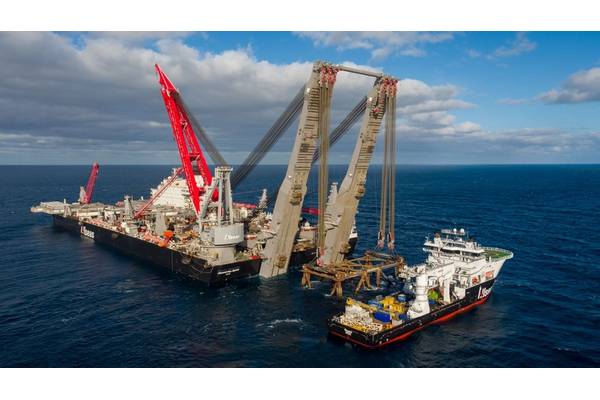 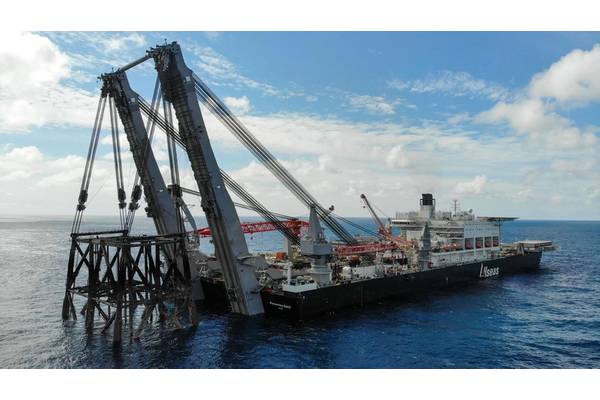 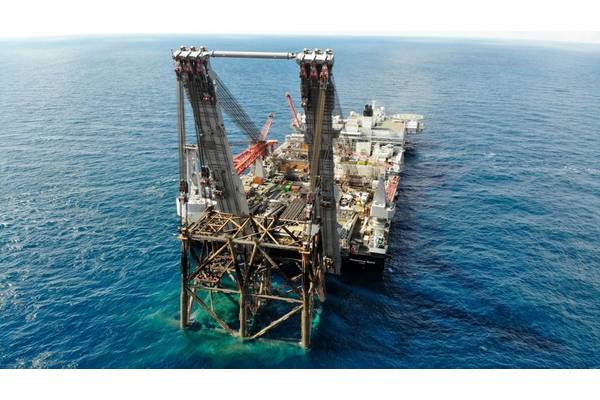 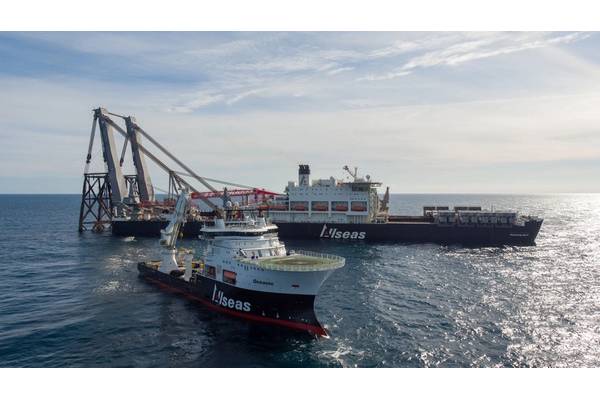 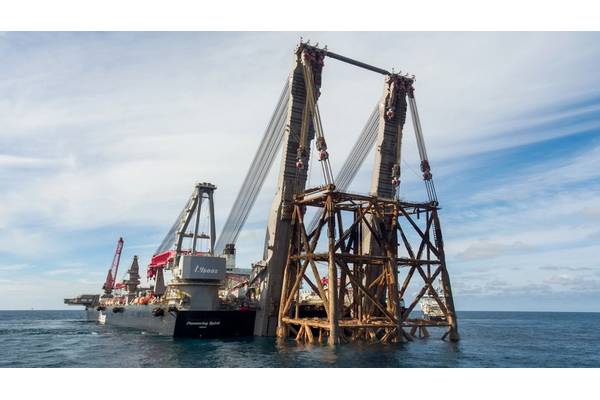 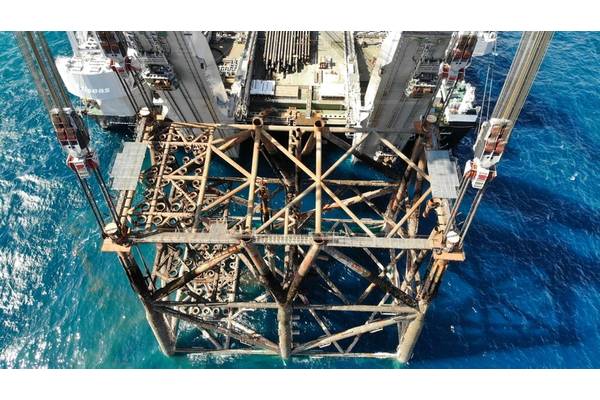 Offshore installation and decommissioning contractor Allseas said Tuesday it had successfully removed and transported to shore Repsol Norge’s 30,000-tonne Gyda platform "in a matter of days."

"The latest job for the vessel’s new jacket lift technology is one of the heaviest ever but well within the system’s 20,000-tonne lift capacity," Allseas said.

"This morning, the jacket was set down directly onto the quayside and reunited with its decommissioned drilling and production topsides, delivered by Pioneering Spirit in May this year. Aker Solutions expects to recycle around 98% of the facilities," Allseas said. 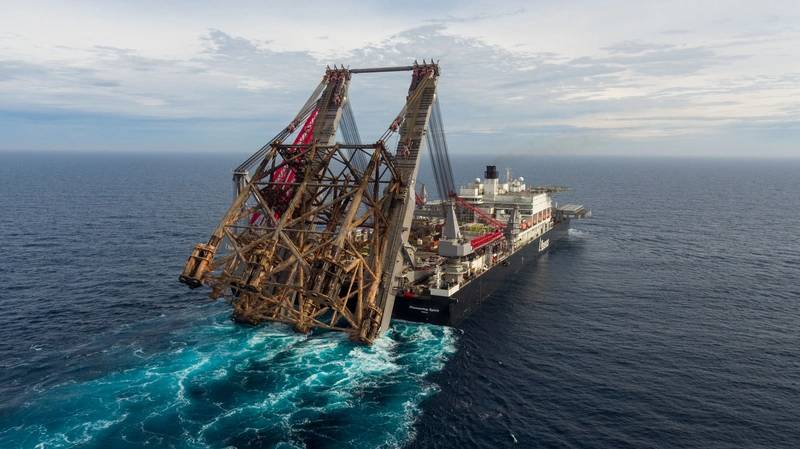 As the jacket was vertically fabricated and installed, the structure could not sustain loading in the horizontal position during transport. The solution of transporting the jacket in a near-vertical (60%) position  ©Allseas

To remind, the Pioneering Spirit last month removed the 18,400-tonne Gyda platform topsides from the Norwegian North Sea in a single lift, too.

“Our mission at Allseas is to remain a frontrunner in the offshore energy market by pioneering ground-breaking technology to meet the industry’s ever-changing needs,” says Allseas President Edward Heerema.

“The Gyda platform removal strengthens our reputation as a game changer in the industry. Again we have shown that Pioneering Spirit provides a significantly faster, safer, more efficient, and sustainable option for the removal and installation of offshore facilities.”

"Split across two campaigns to allow for the vessel’s busy schedule, Pioneering Spirit completed the removal, transport and load-in to the disposal yard of the entire Gyda platform, its 32 conductors and template in 12 days," Allseas explained.

To enable the removal of the jacket, the structure’s 24 foundation piles were cut below the seabed level. Main hoist blocks suspended from the Jacket lift system (JLS) beams were connected to pre-installed rigging and the entire structure was lifted and aligned with the lifting beams.

"As the jacket was vertically fabricated and installed, the structure could not sustain loading in the horizontal position during transport. The solution of transporting the jacket in a near-vertical (60%) position, with interface supports and grillage, made delivery of the complete jacket to the yard possible," Allseas said.

Gyda is a field in the southern part of the Norwegian sector in the North Sea, between the Ula and Ekofisk fields. The field was developed with combined drilling, accommodation, and processing facility supported by a steel jacket standing in 66 m water depth.

The platform started producing in 1990, and a decommissioning plan was submitted in 2016.