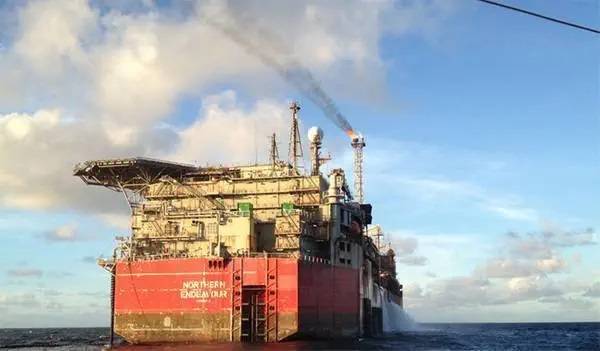 The Australian Government has awarded offshore engineering firm Wood the role of Owner’s Team, to oversee the first decommissioning phase of the Northern Endeavour FPSO unit in the Timor Sea.

The 274-meter-long Northern Endeavour FPSO is currently moored between the Laminaria and Corallina oil fields about 550 kilometers northwest of Darwin in the Timor Sea, and is not producing oil. Production started in 1999 and peaked at 170,000 barrels of oil per day. It was shut down in 2019.

In April, the Australian Gvoernmnet awarded Petrofac an AUD$325 million contract to deliver Phase 1 of the project. This will see the Northern Endeavour disconnected from the subsea equipment, and temporary suspension of wells.

Working on behalf of the Australian Government, Wood will work with the Department of Industry, Science, Energy & Resources (DISER) and contractors to ensure the safe, efficient, and responsible initial phase of this critical decommissioning scope. This is the first time the government has selected a partner in this type of contract and will be key to building momentum in the country’s growing decommissioning market, Wood said. It did not share details on the financial value of the contract.

Who will pay for the decommissioning?

Worth noting, due to the fact that the government was left to deal with the responsibility to remove the FPSO and restore the area, the government last year stunned the oil and gas industry when it first introduced the notion that a levy would be imposed on all offshore oil and gas producers in the country to pay for the cost of decommissioning of Laminaria-Corallina fields in the Timor Sea, containing the Northern Endeavour FPSO.

International oil giants Chevron Corp, Exxon Mobil Corp, and Shell, as well as the Australian oil firm Woodside last year expressed opposition to the levy and the call to pay for the decommissioning of the site in which they had never had any stake.

In March, Australian Parliament passed legislation to impose a temporary levy on industry to recover the costs of decommissioning and remediating the oilfields and associated infrastructure.

According to the government, the levy ensures that taxpayers are not left to pay for the decommissioning and remediation of production facilities.

Documents on the government's website showed that the levy would be at a standard rate of 48 cents (AUD) per barrel of oil equivalent produced in each levy year. The levy is imposed for financial years beginning between July 1, 2021, and July 1, 2029.

"This period has been chosen to ensure that the levy can be imposed for the duration of the decommissioning of the Laminaria and Corallina oil fields and associated infrastructure," the government's website info shows.