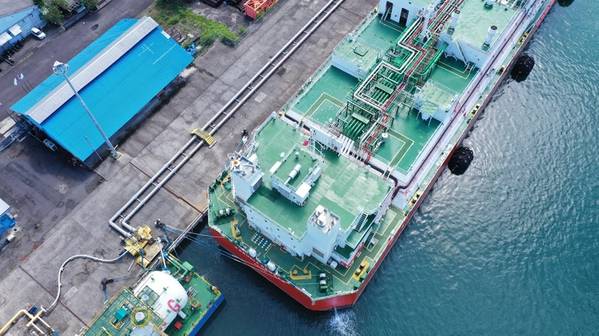 Illustration only - An FSRU - Credit: Karel/AdobeStock

Greece can cope well with potential cuts in Russian gas supply due to the availability of liquefied natural gas (LNG) as an alternative, its energy minister said on Monday after a meeting with energy suppliers and grid operators on energy security.

The country relied on Russian gas via the TurkStream pipeline for 40% of its needs last year. About 70% of its gas imports are used in power generation.

Russian gas flows to Europe via Ukraine and the Nord Stream 1 pipeline have fallen this year after Russia's invasion of Ukraine in February and Europe’s moves to impose sanctions on Moscow, prompting concerns about further disruptions over the winter.

"Greece has the capacity to make it through possible cuts in Russian supplies," Kostas Skrekas said, however.

Compared to other landlocked European countries, Greece is more secure thanks to liquefied gas imports, he said. Supply of LNG, most of it from the United States, outstripped that of Russian pipeline gas in the first quarter of the year.

A storage and regasification terminal off Athens will see its capacity ramped up with the arrival of a new storage vessel, while gas utility DEPA and other Greek gas buyers have lined up additional LNG cargoes if necessary, Skrekas said.

Athens has already allowed Bulgaria to use the Greek offshore LNG terminal and gas grid to cover part of its gas needs after Russia cut off supplies to the country for refusing its roubles-for-gas payment scheme.

Greece has been in talks with Italy to see whether it can store gas there, as it has no gas storage facilities and may need to store enough gas in other states to cover 15% of its annual use for the coming winter. Read full story

Five gas-fired power plants have been standing by to switch to diesel over the winter, Skrekas said.