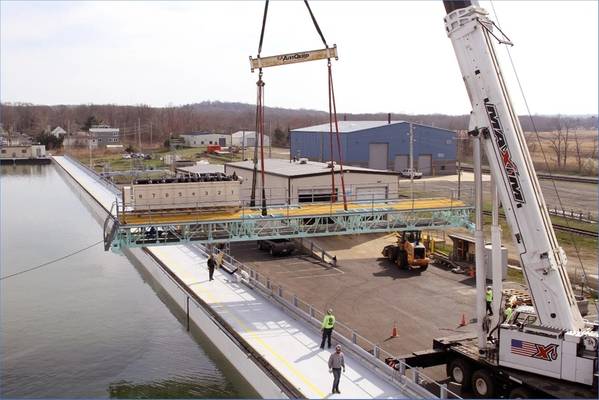 The Bureau of Safety and Environmental Enforcement’s National Oil Spill Response Research and Renewable Energy Test Facility, known as Ohmsett, has now reopened after undergoing significant refurbishment over the past eight months as part of BSEE’s ongoing maintenance plan.

Originally constructed and operated by the U.S. EPA in 1974, the facility was passed to the U.S. Navy and then to the Department of the Interior’s Minerals Management Service in 1990. Today, it is the only facility in the U.S. conducting full-scale oil spill response research, equipment testing and training using live oil. Because Ohmsett is a wave tank, it has also been used to test renewable energy technologies such as marine hydrokinetic electricity generators.

“BSEE is committed to reducing any pollution impacts from oil and other fluids spilled on the Outer Continental Shelf,” said BSEE Director Kevin Sligh Sr. “Ohmsett plays a critical role in testing oil spill response equipment, training responders and mitigating the effects of a spill, whether from conventional or renewable sources.”

Large-scale maintenance occurs on the facility every five years, and includes the dismantling, removal and inspection of major equipment such as the tank’s three moveable bridges, wave generating machinery and wave dampening steel beaches. The paint and seals for the tank’s walls and floor are stripped for inspection and recoating.

The analysis enabled BSEE to develop a baseline from which to measure any future structural issues related to the concrete and the soil surrounding the pool.

“The corrosive salt water and wave action in the tank can impact the integrity of steel rebar in the concrete over time,” Miller explained. “We needed to make sure the tank would stand up to 50 more years of testing and training.”

The U.S. Coast Guard’s Atlantic Strike Team assisted BSEE in completing the refurbishment by refilling the 667-ft wave tank, the largest of its kind in North America, with seawater from the nearby Sandy Hook Bay — a three-day operation that ended on March 24, 2022.

“The opportunity to assist the BSEE Ohmsett test facility in the filling of their one-of-a-kind test tank strengthened partnerships and provided essential real-world training for the National Strike Force Atlantic Strike Team responders,” said Chief Warrant Officer 3 Rick Baynor, Engineer Officer, USCG National Strike Force Atlantic Strike Team. “Dedicating more than 72 hours of logistical, equipment set up and actual large-scale pumping of more than two million gallons of sea water through over 1,000 feet of hose was invaluable for my team in being able to apply and hone their skill sets. The Atlantic Strike Team and I are looking forward to our next opportunity to work with BSEE and their professional staff.”

As portions of the facility’s maintenance were completed, domestic and international customers resumed testing, research and training. With the tank work now mostly completed, customers have rapidly reserved their spots and filled up Ohmsett’s schedule for the rest of the year.