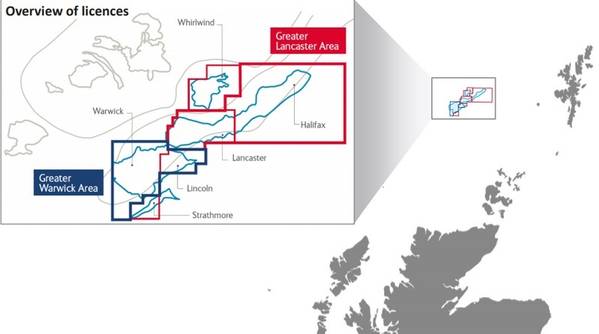 The UK-based oil and gas company Hurricane Energy with its partner Spirit Energy has decided to relinquish its stake in the Greater Warwick Area license containing the Warwick discovery offshore the Shetland Islands.

Greater Warwick Area comprises the Lincoln and Warwick fields located on UKCS licenses P1368 South and P2294. After unsuccessful farm-out attempts, Hurricane and Spirit have previously agreed to surrender of P1368(S) (Lincoln) license. Now, they are relinquishing the Warwick license.

According to Hurricane,  the GWA Joint Venture has reassessed its understanding of the area, evaluating both the basement and the Mesozoic potential of the JV's licenses, and has considered all options for further appraisal and routes to possible development.

"Hurricane has determined that further appraisal and development costs to reach an economic development on the Warwick discovery within the remaining licence term is not feasible for the company. Further to discussions with the company's JV partner, Spirit Energy, the GWA JV has decided to relinquish the P2294 licence area. This is in addition to the previously announced decision to relinquish the Lincoln P1368(S) licence sub area," Hurricane Energy, which produces oil from its Lancaster field west of Shetland via the Aoka Mizu FPSO, said Monday.

The carrying value of the P2294 asset in Hurricane Energy's accounts of c.$4.1 million will be impaired.  This impairment will be an accounting charge only and will not have any cash impact. To remind, before the relinquishing, there had been plans to tie-back the Greater Warwick Area wells to the Aoka Mizu FPSO.

Antony Maris, CEO of Hurricane, commented: "We have made this decision deploying the rigorous screening criteria we bring to all opportunities in terms of determining the most appropriate allocation of our capital to deliver the best value for shareholders. There is no reasonable expectation that the P2294 license could generate any near-term cash realization, thus voluntarily relinquishing the licence at this time allows the company to focus its time and financial resources on alternative and more attractive opportunities."

"Following the recent May lifting [of Lancaster crude] we have updated our cash forecast such that if oil prices remain over $90/bbl we now forecast to have over $70 million of net free cash post bond repayment.  As such we are looking to utilize this cash to generate the best return for shareholders at an acceptable level of risk."