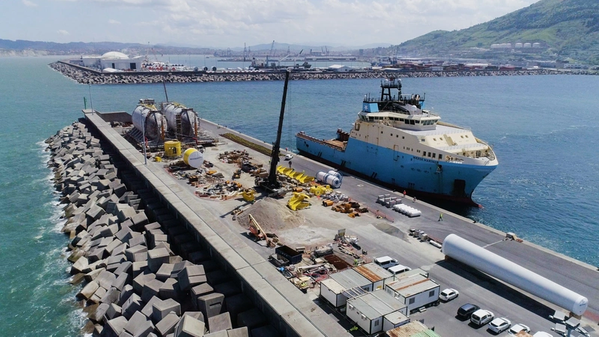 SATH Technology is based on a concrete platform concept with a plug-and-play Single Point Mooring, the same technology used for FPSOs.

This anchoring system allows an easy connection so the platform can be disconnected and taken ashore for O&M. The platform can rotate freely around this single point like a weathervane, reducing the environmental forces on the platform and, as a consequence, the cost of the mooring. It also helps the yaw control of the turbine to orientate the rotor plane against the wind.

The DemoSATH project will use a 2MW turbine in a full-scale prototype that will be deployed offshore Bilbao and will be the first floating turbine connected to the Spanish grid. This project, being developed by Saitec Offshore Technologies, is part-financed by the German energy company RWE Renewables.

The mobilization and loading of the mooring lines elements and vessel preparation were done at Punta Sollana quay, in the port of Bilbao (Spain), where the onshore construction of the floater is currently underway.

Once loaded, the vessel left the Port towards the installation site at BiMEP test area, where the elements’ connection and laying took place. The lines will be recovered from the seabed for a plug-and-play connection to the unit later this year. 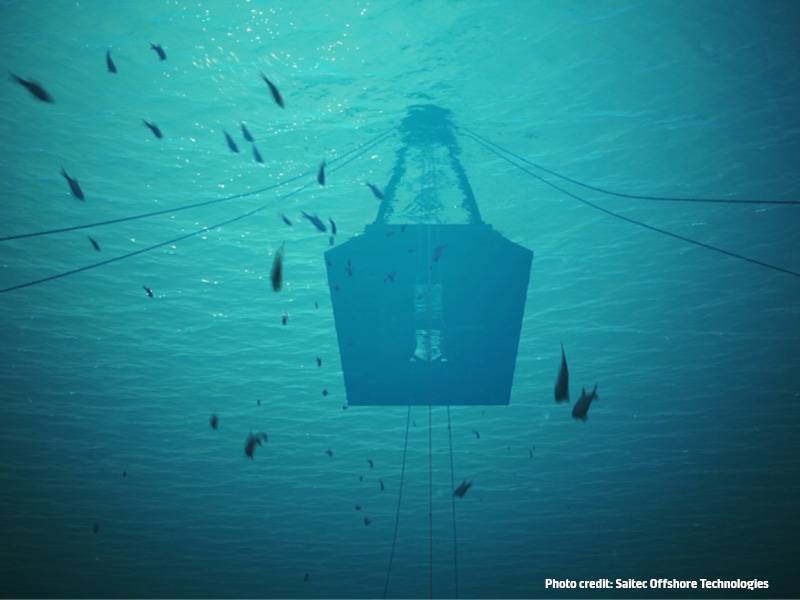 “It is great to see that the DemoSATH project has completed the next step of the offshore works, with the mooring system now in place – an important milestone on our way to the installation and commissioning of the floating turbine later this year. We, as RWE, see great potential for floating wind farms worldwide – especially to unlock opportunities in countries with deeper coastal waters. With DemoSATH we are gaining experience with an innovative concrete-based platform technology and are broadening our expertise in this growth market further,” said Chris Willow. Head of Floating Wind Development at RWE Renewables.

“With the completion of the installation of the mooring system, the DemoSATH project is ready for the installation of the foundation later this year. We have had good collaboration throughout the process – both in the planning and the execution phase. Engagement of the key stakeholders from developer to the fabricator of the floater have been instrumental for the successful completion. With this project, we hope to contribute to the development and maturation of the floating wind industry,” said Yvan Leyni, Director for Floating Wind at Maersk Supply Service.

Meanwhile, the onshore construction of the prestressed concrete floating platform continues at the Port of Bilbao. Works on the transition piece, single point mooring, and boat landing are also carried out, as well as installation works inside the floaters. This will be followed by the launching operation to put the platform afloat. The platform will then be transported to its final deployment site at BIMEP.

The 2MW unit will be tested against real sea operating conditions in a harsh Atlantic environment. The test field at BiMEP facilities are located 2 miles off the Biscay coast where the sea is 85 meters deep. DemoSATH will generate sufficient electricity to cover the energy demand of more than 2,000 local households.

This project aims to collect data and gain real-life knowledge from the construction procedure, operation, and maintenance of DemoSATH floating wind platform for a period of 2 years.