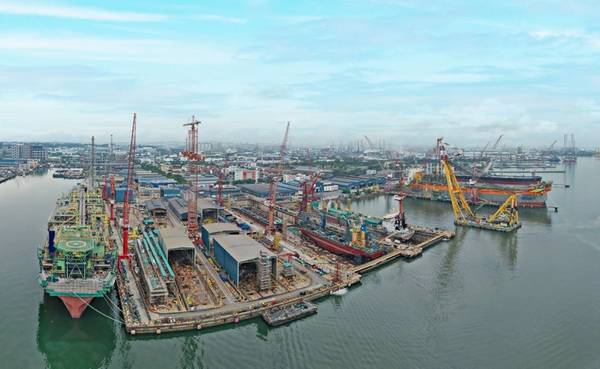 Singapore's Keppel Offshore & Marine has, via its subsidiary Keppel Shipyard, secured contracts worth around S$250 million (~USD180,4 million) for the integration of two Floating Production Storage and Offloading vessels (FPSO).

Keppel Offshore & Marine, which is set to merge with Sembcorp Marine, said Friday that the FPSO integration contracts were awarded by repeat customers, BW Offshore, and SBM Offshore.

The first contract is between Keppel Shipyard and BW Offshore to carry out the integration work on a newbuild FPSO. The contract follows the Letter of Award that Keppel Shipyard received from BW Offshore, as announced by Keppel on November 25, 2021.

Keppel Shipyard will be responsible for the installation and integration works of about 43,000 tons of topside modules, deck equipment, and the turret mooring system, as well as completion and commissioning support for BW Offshore. The hull of the FPSO is expected to arrive in Singapore in mid-2023, with delivery scheduled for the second half of 2024.

Keppel Shipyard has also signed contracts with Single Buoy Moorings, Inc. (SBM) and a joint-venture company between SBM Offshore and McDermott to carry out the fabrication, installation, and integration of topside modules for an FPSO project.

Chor How Jat, Managing Director (Conversions & Repairs), Keppel O&M, said, “Despite a volatile market, we are pleased to be awarded contracts from our longstanding customers as it is a testament to the partnerships that we have built up over decades of collaboration. We are seeing signs of fundamental improvement in the market, and are well-positioned to team up with customers to provide innovative, reliable, quality, and value-added solutions.”

While Keppel did not share details on the FPSOs to be integrated, it is likely that the one it will be working on as part of SBM Offshore-McDermott contract is the FPSO 'ONE Guyana' destined for deployment at ExxonMobil's Yellowtail development in the Stabroek Block offshore Guyana.

'ONE Guyana' will be the fourth and largest FPSO to be deployed offshore Guyana.

The FPSO will be designed to produce 250,000 barrels of oil per day, will have an associated gas treatment capacity of 450 million cubic feet per day, and a water injection capacity of 300,000 barrels per day.

The FPSO will be spread moored in a water depth of about 1,800 meters and will be able to store around 2 million barrels of crude oil. SBM Offshore in April confirmed the contract award to supply the FPSO to ExxonMobil, and said that the turnkey phase of the project would be executed by a special purpose company (SPC) established by SBM Offshore and McDermott.

As for the BW Offshore contract, the deal is likely related to the Barossa FPSO that BW Offshore is building for deployment at Santos' Barossa field in Australia. BW Offshore's quarterly presentation from February showed that the company had entered into an LOA with Keppel Shipyard as the integration yard for the Barossa project. Topside modules will be delivered by Dyna-Mac.

The FPSO will have a processing capacity of up to 800 million standard cubic feet per day (MMSCFD) of gas and a design capacity of 11,000 barrels per day of stabilized condensate. The FPSO will be turret moored with a newly built hull based on BW Offshore’s RapidFramework design. Initial gas production from the FPSO is expected during the first half of 2025.

BW Offshore has a lease and operation contract with Santos, with a firm period of 15 years, and 10 years of options. The firm period contract value is $4.6 billion. The FPSO hull will be built in South Korea, after which it will be fitted with topsides in Singapore before being towed and permanently located in the field where it will process natural gas prior to its transport via pipeline to Darwin LNG. Condensate will be stored on the FPSO for periodic offloading.