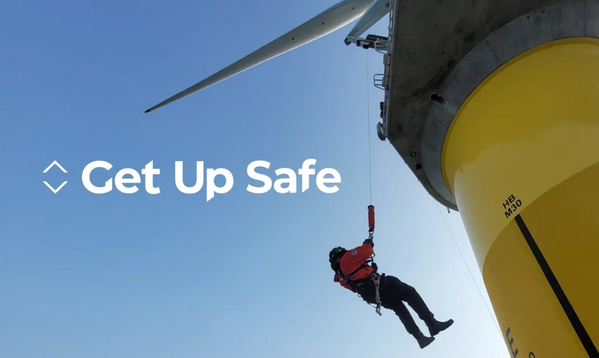 Sif, a Dutch manufacturer of monopiles and transition pieces (TP) for offshore wind turbines, has signed an agreement with Pict Offshore to integrate their Get Up Safe (GUS) motion-compensated lifting system, as standard, into Sif's Skybox TP-less monopile foundation.

The GUS system, developed by Pict Offshore, a company partly owned by Ørsted, is a heave compensated personnel lifting solution that transforms the way in which maintenance technicians access offshore wind turbines from Crew Transfer Vessels.

According to info on Pict Offshore's website, with the GUS system in place, technicians are lifted and lowered directly between the crew transfer vessel and the platform.

"This removes the need for technicians to step between the bow of the vessel and the ladder; a potentially dangerous operation that requires skilled coordination to be carried out safely during variable weather conditions, and eliminates a tiring climb, which can be up to 20 meters in length," Pict Offshore explains on its website.

The agreement between SIF and Pict, combines Pict’s next-generation access technology with Sif’s next-generation TP-less foundation. As the Skybox can be installed in one lift with no welded brackets on the monopile, it keeps costs and maintenance low and increases driveability and overall efficiency, Sif said.

According to SIF, The first deployment of the Skybox including the GUS system will be in the second half of this year when the second demonstrator “Skybox Full” will be built.

According to Sif, the “Skybox Lite” demonstrator that went offshore in 2021 now serves as a “mule” for an intense onshore testing and measurement campaign that will be executed over the summer this year. Incorporating all lessons learned from this campaign, the “Skybox Full” demonstrator will be built after summer for offshore deployment in 2023.

The project is being executed in line with its original planning, both Technology Readiness Level, as well as DNV certification, are on track for serial deployment in 2024, Sif said.

See below how Sif Skybox system works. Take note, the animation was launched last year, and does not include Pict Offshore's GUS system.