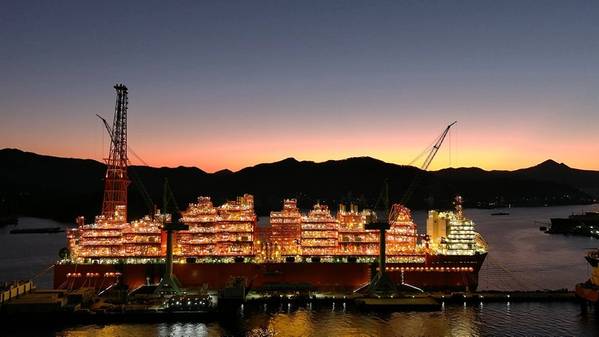 Coral Sul FLNG is a liquefied natural gas floating facility built to produce natural gas from the Rovuma Basin, located approximately 250 km Northeast of Pemba and 50 km from the Mozambique coast. It is the first FLNG facility operating in ultra-deep waters, connected to an underwater system at a depth of around 2,000 meters.

The contract is worth approximately $150 million with a duration of around 9 years, plus one optional year. The activities cover maintenance of the entire FLNG facility and onboard supervision as well as the creation of an onshore logistical base.

The mooring of Coral Sul (South) FLNG, East Africa's first FLNG unit, and the world's deepest, was completed on March 4, by tensioning 20 mooring lines, with the FLNG now installed in 2,000 meters of water. According to Eni, the 20 mooring lines weigh around 9,000 tons in total.

The giant Coral Sul FLNG unit, 432 meters long and 66 meters wide, and weighing around 220,000 tons, earlier this year arrived in Mozambique after a journey from South Korea where it was built by Samsung Heavy Industries.

With a capacity of 3.4 million tons of liquefied natural gas per year, the FLNG is now moored at its operating site in the Rovuma basin offshore Mozambique where it will be used to produce gas from Coral offshore gas field in Area 4.

The project is based on six ultra-deepwater wells in the Coral Field, at a water depth of around 2,000 meters, feeding via a fully flexible system the Coral-Sul FLNG. The Coral field has about 16 trillion cubic feet of gas in place and was discovered by Eni in May 2012. Production start-up is expected in the second half of 2022.