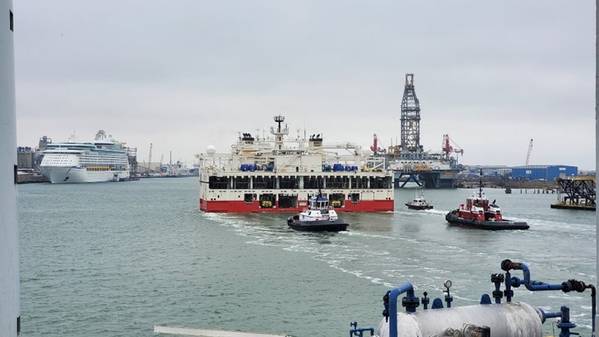 The Norwegian seismic survey company PGS' seismic vessel Ramform Titan recently entered Galveston, Texas, marking the first-ever visit of a Titan-class vessel to a U.S. port. The PGS vessel is mobilizing for a 4D survey in the Gulf of Mexico.

"The entry to the Galveston channel was closed for outgoing traffic while the pilots guided the vessel through the channel on her way to her berth. The vessel then completed the comprehensive formalities of entry to a US port, including customs clearance and immigration for all crew," PGS said last week.

The US Coast Guard (USCG) boarded the vessel with a team of five inspectors, who spent over six hours examining the vessel and interviewing the Captain, Chief Engineer, and other officers on duty.

"They inspected all safety equipment and verified that our procedures are not only sufficient and complete but also that we are following them. This was followed by lifeboat and fire-drills," PGS said.

"The Captain, the Chief Engineer and the crew of the Ramform Titan passed the USCG scrutiny with excellence. The inspectors were not able to find a single deficiency, "PGS said.

Back in January, PGS said it had won a contract for a 4D survey in the Gulf of Mexico.

PGS said it would use a Ramform Titan-class vessel for the project, wit the survey slated to start in late February and en in late March.

The seismic surveyor did not say who the client was.