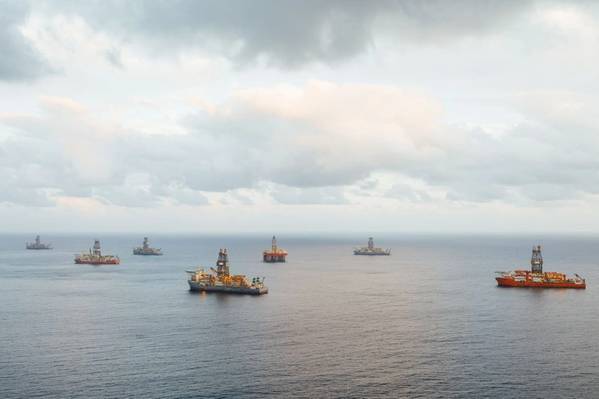 Offshore drilling contractor Transocean has said this week that its eighth-generation Deepwater Titan drillship has completed drydocking in Singapore.

The Deepwater Titan is Transocean's first 20,000 psi ultra-deepwater drillship, and will, once delivered, be used by Chevron in the U.S. Gulf of Mexico.

Transocean shared the drydocking completion milestone via social media, along with the drillship photo, saying: "Wonderful teamwork on display as Transocean, Sembcorp Marine Ltd, and Chevron celebrate the completion of the Deepwater Titan drydocking in Singapore. We’re looking forward to the next phase of the project and getting this beautiful new 8th-generation drillship ship out to sea. Great job, team!"

Transocean has previously said it will be the first company to own an ultra-deepwater floater rated for 20,000 psi operations, the Deepwater Titan.

The offshore drilling firm ordered two rigs, eventually named the Deepwater Titan and the Deepwater Atlas, from Sembcorp Marine's Jurong Shipyard in 2014 with plans for rig deliveries in 2Q 2017 and 1Q 2018, respectively.

After several delays, the company, on December 31, 2018, announced it had secured a rig design and construction management contract, as well as a five-year drilling contract, with Chevron, for what is now known as the Deepwater Titan.

The contract called for significant upgrades on the rig, including two 20,000 pounds per square inch blowout preventers. National Oilwell Varco (now known simply as NOV) in 2019 sold two 20,000-psi (20K) blowout preventer (BOP) stacks to Transocean, expected, at the time, to be deployed on a Gulf of Mexico well in 2021.

And, indeed, the Deepwater Titan had been expected to start working for Chevron on its $455,000 a day deal in 2021. In July 2020, Transocean said the rig would start drilling for Chevron in the fourth quarter of 2021.

In June 2021, Sembcorp Marine and Transocean agreed to revise the delivery dates of the two ultra-deepwater drillships, taking into consideration work disruptions arising from the COVID-19 pandemic.

As for the Deepwater Atlas, the Titan's sister rig, Transocean last year secured a contract for it with Beacon Offshore Energy for drilling at the Shenandoah project in the U.S. Gulf of Mexico.

The Deepwater Atlas is expected to begin operations in the fourth quarter of 2022. Transocean said last year that the rig would initially be using dual blowout preventers (“BOP”) rated to 15,000 psi.

Following the 20,000 psi BOP installation, the Deepwater Atlas will start the second phase of the project – the well completion program. This phase is expected to last approximately 275 days and contribute approximately $125 million of contract drilling revenue.