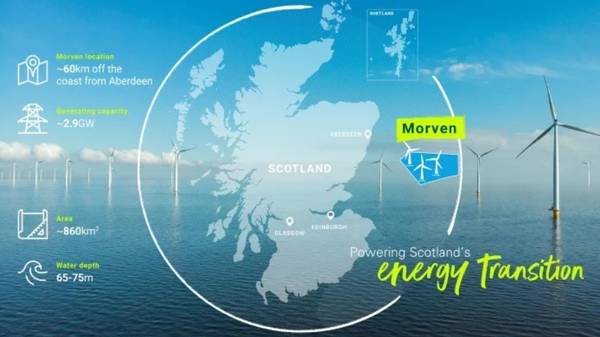 BP and EnBW have been awarded a lease option off the east coast of Scotland to develop a major offshore wind project — to be named Morven.

The award was made in the highly competitive ScotWind leasing round, the results of which were announced by Crown Estate Scotland today.

The approximately 860km2 lease is located around 60km off the coast of Aberdeen. The E1 lease is in an advantaged area, allowing the partners to develop it as a fixed-bottom offshore wind project with a total generating capacity of around 2.9 gigawatts (GW), sufficient to power more than three million homes.

"The success of the bid is expected to unlock a number of investments across the country, as part of BP’s integrated energy company approach, leveraging its existing North Sea infrastructure, skills and relationships and EnBW’s experience in offshore wind," BP said.

"Along with the offshore wind development, these investments include significant expansion of electric vehicle charging infrastructure in Scotland and green hydrogen production. Together, these represent up to £10 billion of investment in support of offshore wind and Scotland’s energy transition," BP added.