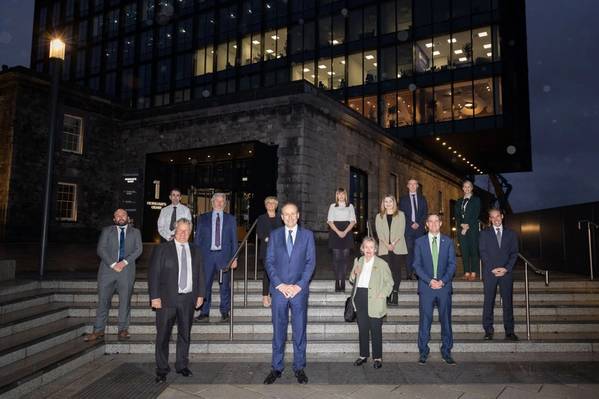 The new premises, located at 1 Horgan's Quay, Waterfront Square, in the port city of Cork, have been inaugurated by the Irish Prime Minister Micheál Martin.

Iberdrola is developing three offshore wind projects off the Irish coast, two of which will use floating technology (called Inis Ealga and Clarus, respectively), and the third, called Shelmalere, will use traditional technology, i.e. fixed foundations anchored to the seabed.

Once operational, the three offshore farms will generate enough green energy to power the equivalent of 2.6 million Irish homes.

"The commissioning of these projects, expected between 2028 and 2030, will make a significant contribution to meeting the Irish Government's climate action plan which sets a target of 5 GW of installed offshore wind capacity by 2030 so that 80% of electricity generation will come from renewable sources," Iberdrola said.

Irish Prime Minister Martin said."Renewable energy will play an important role in the future of the island as we seek to prosper and grow in a truly sustainable way. I look forward to seeing DP Energy and Iberdrola progress both at home and abroad as we seek to work together for a green future for the whole nation."

Charlie Jordan, Iberdrola's offshore wind director for the UK and Ireland, said: "Ireland's particular geographic and wind resource conditions will allow it to be among the strongest countries in the European offshore sector in the coming years and to benefit from a significant flow of investment while creating thousands of highly skilled jobs.

In Ireland, Iberdrola says it plans to invest up to 100 million euros in new renewable and storage projects between now and 2025.

Its actions under development include the repowering and hybridization with batteries of the Barnesmore wind farm in County Donegal (Ireland), Rigged Hill, Corkey, Elliots Hill and Callagheen in Northern Ireland. It is also building the country's largest battery facility in Gorman (50 MW), which will be operational this year.