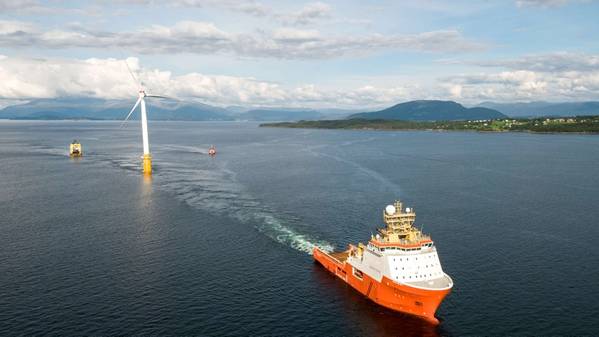 Marine-i said Tuesday it was providing support to the offshore specialist Reflex Marine, which is developing a new system for anchoring floating offshore wind (FLOW) installations called the JAVELIN.

Part-funded by the European Regional Development Fund, Marine-i is designed to help the marine technology sector in Cornwall and the Isles of Scilly grow through harnessing the full potential of research and innovation.

Philip Strong, CEO of Reflex Marine, explains: “Mooring FLOW turbines cost-effectively and reliably presents a considerable challenge and one of significant commercial importance to the sector. The design of the anchor is key to developing cost-effective moorings.

"JAVELIN is an innovative concept which changes the paradigm for high-performance moorings for floating offshore wind applications.  It is differentiated from existing mooring solutions in that the anchor is installed in a borehole deep below the seabed, in higher strength geological formations. It is then locked into the borehole using a novel technical solution.

"The JAVELIN concept makes use of established offshore drilling techniques to economically drill boreholes for the anchors. Special deployment methodologies are also under development to reduce installation costs.”

"This will be key to allowing denser spacing of wind turbine generators, which is critical to field economics. This means JAVELIN will offer a reliable, low-cost anchor solution suitable for a wide range of water depths, seabed geologies and mooring system designs," the company said.

Prof Lars Johanning, Programme Director for Marine-i, says: “The JAVELIN system would attract interest from FLOW developers around the world and have a significant impact on the market. Most rival technologies were developed 30 years ago for the oil and gas sector, which was far less sensitive to the system costs, since moorings were deployed at a scale far smaller than will be required for FLOW. Reflex Marine have come up with a new solution that is geared to the specific needs of today’s FLOW operators.”

Philip Strong adds: “It is great having access to the specialist RD&I expertise that is available to us through the Marine-i project. This will help us develop and commercialize the JAVELIN concept at a much faster rate than might otherwise be possible.”