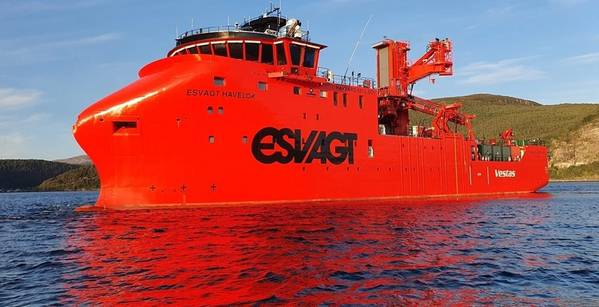 The ship handed over Tuesday was the third in the same series, but it is the sixth wind farm service vessel that the Sognefjorden yard has delivered to the Danish offshore wind pioneer

Managing director of Havyard Leirvik, Tor Leif Mongstad, says that the six vessels the yard has delivered to the offshore wind industry mean that Havyard Leirvik now has a very strong position in this segment.

Service Operation Vessels (SOV) are seen as a cost-efficient solution when it comes to the maintenance of offshore wind farms located far from shore where frequent transportation of technicians from shore is not practical due to the distance.

An SOV is deployed near a wind farm and serves as sort of a hotel/workshop where technicians then can spend weeks offshore, and "walk to work" via specialized gangways.

Esvagt in July said that its newbuilt offshore wind service vessel Esvagt Alba was set to start its contract in the UK with wind turbine maker Vestas.

The Esvagt Alba service operations vessel, delivered by Havyard, will be the base for the operation and maintenance of the Moray East offshore wind farm off the coast of Scotland.