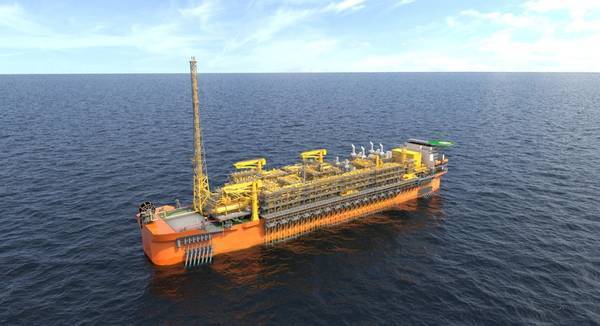 An illustration of a Fast4Ward FPSO. The image doesn't reflect the final look of the FPSO Alexandre de Gusmão. (© SBM Offshore)

Dutch FPSO leasing specialist SBM Offshore said it has signed a letter of intent with Petrobras to lease and operate a newbuild floating production, storage and offloading unit (FPSO) at the Mero field in the Santos Basin offshore Brazil. SBM did not disclose financial details of the 22.5-year lease and operate contracts.

The FPSO, to be named Alexandre de Gusmão, will be designed and constructed using SBM's Fast4Ward program incorporating the company’s new build Multi-Purpose Floater (MPF) hull combined with several standardized topsides modules. SBM Offshore’s fifth MPF hull has been allocated to this project. Completion of the FPSO is expected in 2024.

SBM said the FPSO will be designed to produce 180,000 barrels of oil per day and treat 12 million standard cubic meters of gas per day. Furthermore, the unit will have a water injection capacity of 250,000 barrels per day and a minimum storage capacity of 1.4 million barrels of crude oil. The unit will be spread moored in approximately 1,900 meters water depth, approximately 160 kilometers from Arraial do Cabo, Rio de Janeiro state.

The Libra block, where the Mero field is located, is under a Production Sharing Agreement to a Consortium comprised of Petrobras with 40%, Shell Brasil with 20%, Total Energies with 20%, CNODC and CNOOC with 10% each and the state-owned company Pré-Sal Petróleo SA as manager of the Production Sharing Contract.