OMSA Goes on the Offensive to Document Jones Act Violations 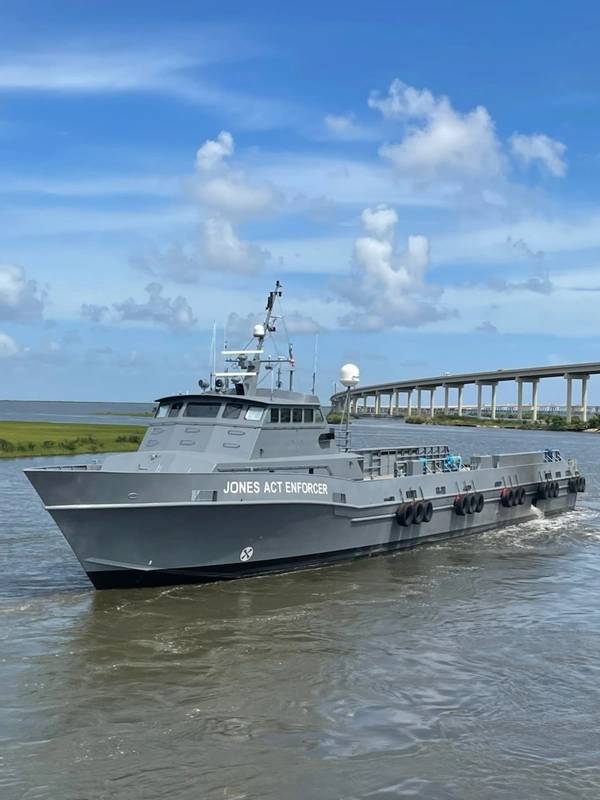 Offshore Marine Service Association (OMSA) launched a vessel dubbed the Jones Act Enforcer, a boat that will be used to gather video and photographic evidence of Jones Act violations, the organization reports. In turn, evidence of violations will be submitted to authorities, made public and shared with the media.

The Jones Act  requires seaborne cargo shipped between two U.S. points to be carried by U.S.-built, crewed, and owned vessels, and is a primary component of U.S. maritime policy with support of the U.S. Navy, Coast Guard, U.S. Maritime Administration and members of Congress.

Essentially, the new boat is a key piece of OMSA's continued fight to close Jones Act loopholes, that once opened are repeatedly exploited, the organization says.

“The Act is not being implemented in a manner that is correct under the law and as a result, American security is being threatened and American workers are losing jobs to foreign vessels,” said Aaron Smith, OMSA President and CEO. “It’s time that someone takes a stand and that’s exactly what we’re doing. The Jones Act is very simple, if a foreign vessel picks up cargo at one point in the United States, and takes it to another point, it has broken the law,” Smith continued. “Foreign vessels have succeeded in confusing this issue for a long time. Now, we’re going to shine a bright spotlight on their actions and show everyone just how many foreign mariners are taking money out of U.S. mariners’ pockets. If foreign vessel owners or the companies they work for don’t like this scrutiny, I suggest they hire U.S.-owned, U.S.-crewed, and U.S.-built vessels.”

According to Smith, the vessel is owned by Harvey Gulf International Marine and it sails under a long-term charter to OMSA.  When on charter, the vessel operates under the direction of the OMSA President based upon tips submitted to him directly.  A group of OMSA members have come together and voluntarily increased their dues to pay for the specialized equipment that is on the vessel to document violations.